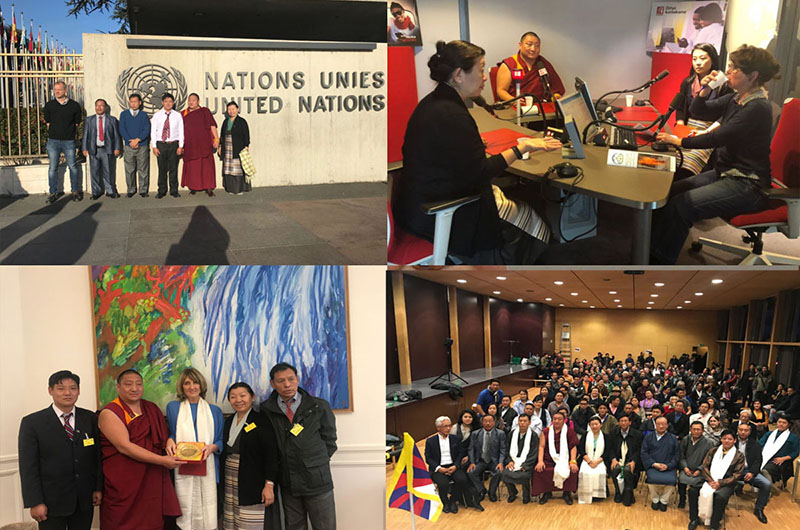 The delegation led by Dolma Tsering, Ven Atuk Tsetan, Dawa Phunkyi and Ngawang Tharpa began their tour in Brussels. On their arrival at Brussels International airport on November 11, the delegation was welcomed by Tashi Phuntsok, Representative of the Office of Tibet (OoT), President of International Campaign for Tibet and Regional U-tsang Association.

The following day, the delegation attended a meeting at Antwerp which was organized by the Tibetan Community in Belgium. At the meeting, the Vice President of the Tibetan Community in Belgium introduced the itinerary for the day following which Representative Tashi Phuntsok welcomed the delegation and introduced them to the audience.

The delegation addressed the Tibetan people at the meeting on various topics. Parliamentarian Dolma Tsering spoke about the Middle Way Approach and Ven Atuk Tsetan spoke on the achievements of His Holiness the Dalai Lama while Dawa Phunkyi and Mr.Ngawang Tharpa remarked on the way Tibetan democracy has evolved.

They also spoke about the Tibetan language and the importance of its conservation. The parliamentarians also engaged in a question answer session. The President of the Tibetan Community in Belgium delivered the last speech of the day.

The next day, the delegation met with members of the International Campaign for Tibet, who along with Representative Tashi Phuntsok briefed them regarding the European Union's policies in relation to Tibet. The delegation was also informed about the ongoing activities of the Office of Tibet, the workings of the EU institutions, the current situation of EU-China relations and the Human Right Policies of European Union.

On November 14, the delegation engaged in a question-answer session with the International Campaign for Tibet relating to their activities in social networks. Following this interaction, the delegation departed for France.

When they arrived in France, the delegation was received by the Coordinator of Office of Tibet, Tibetan Community France, Regional U-Tsang association, Regional Domed association and Students for free Tibet.

At the meeting, some Senators pledged to continually support the Tibet cause. The delegation also met with the deputy of the Human Rights Section under the External Ministry of France and briefed him on the same.

The Parliamentarians also spoke to a TV channel about the situation inside Tibet. They also discussed Tibet's fragile environment, the freedom of religion and the condition of the political prisoners inside Tibet. The delegation which was accompanied by Coordinator of Office of Tibet, the director and members of International Campaign for Tibet also visited the Conflans-Sainte-Honorine and evaluated the conditions of the Tibetans living there.

On November 17, with Tibet supporters, researchers and Members of Amnesty International, the Parliamentarians conducted an in-depth discussion over the situation inside Tibet.

After finishing this discussion, the delegation left for Switzerland for a four day visit from November 17-21.The visit to Switzerland was under the coordination of International Campaign for Tibet Brussels.

In Switzerland, the delegation was received by the Representative Ngodup Dorjee, Tibetan parliamentarian Samdho Jampa Tsering and Pema Lanying, Vice-President of Tibetan Community in Switzerland & Liechtenstein at Zürich main station.

On November 19, the Parliamentarians met with Takna Jigmey Sangpo, a former Tibetan political prisoner at Turbenthal OPH following which they visited the Rikon Monastery, the Tibetan weekend school of Rikon, the Aargau and Luzern Tibetan communities. Speaking at the weekend Tibetan class at Aargau and Lucerne, the delegation highlighted the importance of the Tibetan Language and the need for its usage in daily life.

On November 20, the Parliamentary delegation met with the Swiss Parliamentarians for Tibet Group MP Prisca Birrer Heimo, SP LU, MP Martin Nael, SP Zürich and MP Regula Rytz, GP, BE. The meeting was coordinated by Swiss Tibetan Friendship Association Vice-President Lhawang Ngorkhangsar & Jose. The Parliamentarians discussed various issues related to Tibet including the increasing human rights violation. Following that, the Parliamentarians visited Geneva where they met Fernand de Varennes, UN Special Rapporteur on Minority Issues and spoke to him about how the Tibetans are becoming a minority in their own homeland.

On November 21, the Parliamentarians met with a UN Special Rapporteur on freedom of Religion and highlighted the absence of freedom of religion in Tibet. The delegation appealed for strong support from the United Nations to address the issue and hold China accountable.

After wrapping up their schedule in Geneva, the delegation left for Brussels. The delegation is to conclude their tour in the Netherlands after which they will return to Dharamshala on November 30, 2017.