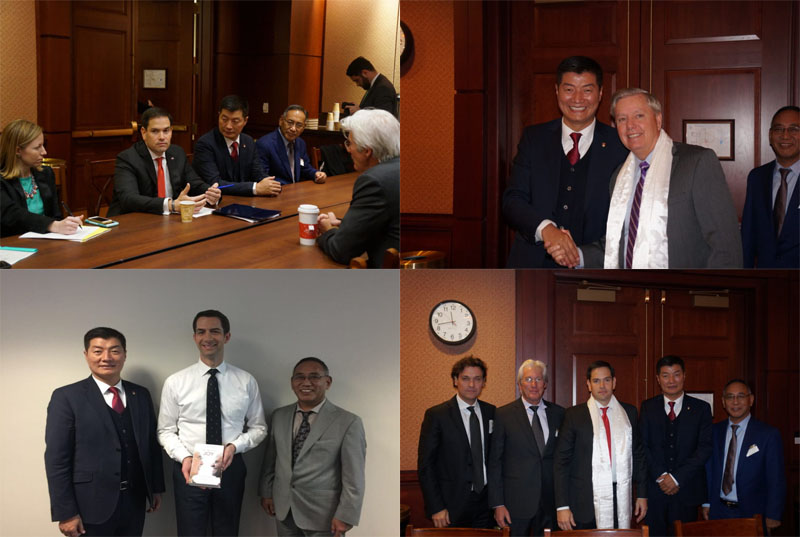 Discussion topics included China's global influence, US funding for Tibet programmes, The Reciprocal Access to Tibet bill, and the need to appoint a new special coordinator for Tibetan Issues in the State Department. The seat has been empty since the election of the new US Administration.

Throughout the hour-long meeting, both Republican senators were supportive and Senator Lindsey Graham agreed to continue support funding for Tibetan Communities. According to CTA: "Both the Senators actively engaged in the deliberation and provided useful guidance and reiterated their support for the Tibet cause."

After the meeting, Senator Mark Rubio delivered the following statement: "We had a very important meeting today about Tibet and the cause of really what's a human dignity, human rights – what's happening there, an entire culture that is being threatened by the Chinese Communist Party, religious liberties that are being oppressed, and why the U.S. needs to be a leader on it."

"But ultimately, this goes to the heart of who are we as a nation. Do we believe in the founding principles of this country, and do we want to make sure we defend and extend that to people all over the world? And that's the thing that we are really focused on here. We'll continue to work hard on this cause. I hope you'll care about it," Senator Rubio added.

On the 7th of December, Dr Sangay also met with Senator Tom Cotton of Arkansas. With regard to Senator Cotton, the CTA stated he is "one of the closest senators to President Trump . . . and has met President Dr Sangay over four times in less than five years to discuss the Tibet issue and ascertain the situation inside Tibet." Concerning The Middle Way, Dr Sangay spoke about the need to resume dialogue with China about the Tibet issue.

Following these meetings, Dr Sangay traveled to New York to meet with Chinese Democracy Activists, youths, and give an address at the North American Solidarity with Tibet Rally.

Durring his stay in New York City, Dr Sangay also gave an address to Chinese and Tibetans who were gathered by the Office of Tibet, Washington DC. Among those gathered were Chinese Tibet supporters, intellectuals, writers, and democrasy activists.

“Dr Sangay spoke about the importance of grassroots support of ordinary Chinese public to resolve the Tibet issue and informed the gathering of His Holiness the Dalai Lama’s advice of maintaining friendly and harmonious relations between Chinese and Tibetans. He applauded the gathering as an example of Sino-Tibetan friendship and called it a step in the right direction.”

Dr Sangay was joined by Speaker Khenpo Sonam Tenphel who discussed “ the rich historical and cultural relations shared by the two distinct people of Tibet and China since time immemorial and said that this historic bond has resulted in many Chinese expressing support for the the Middle Way Approach.”

Ngodup Tsering also spoke out about his willingness to work towards a resolution of the Tibet issue through Chinese outreach.

Chinese representatives who also spoke at the gathering include: Prof Ming Xia, Hu PingWang, Wang Juntao, Li Weidong, Chen Pokong, Dr Yang Jingli and Xiang Xiaoji. CTA wrote about their statements writing: “They expressed admiration for His Holiness the Dalai Lama’s vision for world peace and extended support to the resolution of Tibet issue based on the Middle Way Approach.”

Ending the gathering, Tibetan Cultural dances were performed as a gesture of gratitude towards the Chinese community.