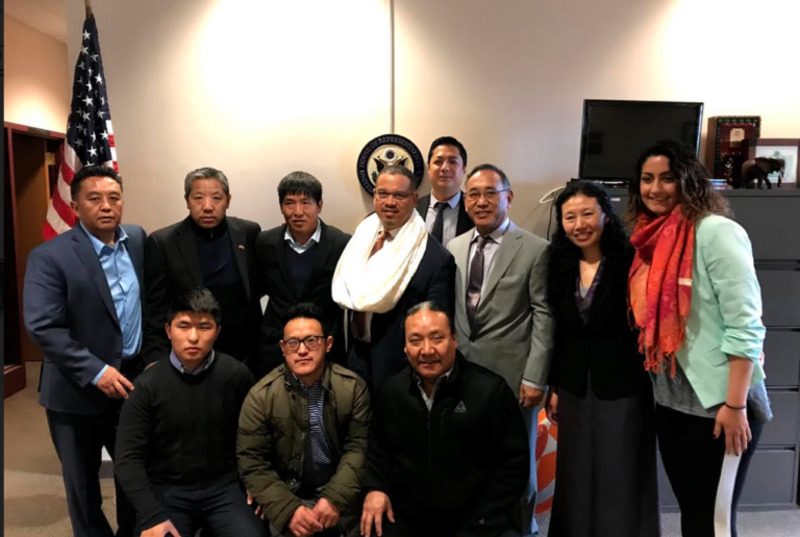 The Tibetan-American Foundation of Minnesota (TAFM) organized the meetings, welcoming the two Tibetan men to Minnesota on March 22.

On March 23, Dhondup Wangchen and Rep. Ngodup Tsering were accompanied by Ngawang Chime, President and other board members of TAFM, as they met with US congressman Keith Ellison, and members of Minnesota state legislature Representatives Mary Kunesh Podein, Carolines Laine and Rodger Chamberlain. In the afternoon, they met US congressman Tim Walz.

During the meetings, Dhondup Wangchen spoke about the creation of his documentary film ‘Leaving Fear behind’ and the reasons for his imprisonment. He also talked about the situation of political prisoners inside Chinese prisons and the sustained difficulties even after being released from prison.

Representative Ngodup Tsering talked about the Tibet issue in general and thanked the congressmen and women for their continued support for the Tibet issue and the Tibetan people. He also invited them to visit the Central Tibetan Administration based in Dharamshala to witness the functioning of the exile Tibetan administration.

The legislators of both the US and Minnesota state congress expressed their solidarity with the Tibet cause and support for the Tibetan people.

Tibetan-American Foundation of Minnesota (TAFM) is one of the largest Tibetan associations in the US. The award that will be presented to Dhondup Wangchen will be the second such award presented by TAFM to Tibetan political prisoners. The first award was presented to Late Tulku Tenzin Delek Rinpoche and was received by his niece Nyima Lhamo.