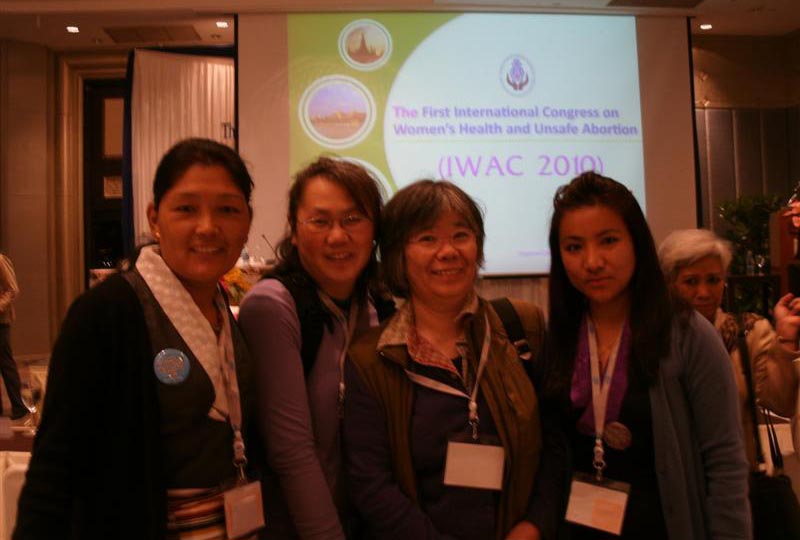 The Prime Minister of Thailand Mr. Abhisit Vejjajiva gave the opening speech on 20 January, at the prominent conference which offers the latest information about expanding the means of care for women's health and abortion safety.

Prior to the ICWHUA conference, the TWA members, along with 52 women's organizations from the Asia Pacific region, attended the Asia-Pacific Regional Consultation Meeting (RCM) of the WGNRR, also held in Bangkok, from 17-19 January, 2010. 52 participants from 27 countries gathered to reassert their support for the realization of reproductive rights for all women and in particular for women under repressed regimes like Tibet. "A women's body is her right and she has the right whether or not to reproduce, and a state cannot interfere in this regard," stated Samten Choedon, Vice President of TWA.

The 52 members of the Asia-Pacific network of WGNRR jointly declared that women's rights are not protected, because conflict, sexual violence and discrimination against sexual minorities are common. According to Amy Kesterton, Policy Officer of WGNRR, "Though our governments have made numerous commitments to fulfill the sexual and reproductive rights of their people...[they are] failing to put these into practice. Neoliberal policies are hindering progress, widening the gap between rich and poor and between commitments and realities."

Kathy Mulville, the coordinator of WGNRR said that, "There is a lack of information, education and affordable services, persistence of discriminatory social norms and a rise in political and religious fundamentalism. She further reminded the conference that, "We, the citizens, are failing to hold our governments accountable, to stand up and demand our rights."

As a member of WGNRR, the TWA is committed to advocating and campaigning for the advancement of sexual and reproductive health and rights for all. The organization works to include the presence of Tibetan women and their voices at international meetings like the WGNRR's ‘RCM' and the WHRRF's ‘ICWHUA'.

"We attended the women's conferences in Bangkok to further our cause, to share experiences, build knowledge and capacity and to raise our voices at such momentous international platform," explained Dhardon Sharling, TWA's Research and Media Officer.

TWA and the 51 other participants at the WGNRR Asia-Pacific Regional Consultation Meeting resolved to:

* Build our capacity to analyze international and country policies, commitments and laws and reveal the discrepancies' between these and realities on the ground;
* Gather and disseminate reliable, credible information on the rates and consequences of unsafe abortion;
* Hold governments to account and press them to meet their commitments
* Join together and campaign, uniting the voices of most disadvantaged including those of women and young people and strengthening the Reproductive and Sexual Health and Rights movement at the grassroots level;
* Share our experiences and help build each other capacities to strengthen support and advance the cause of Reproductive and Sexual Health and Rights