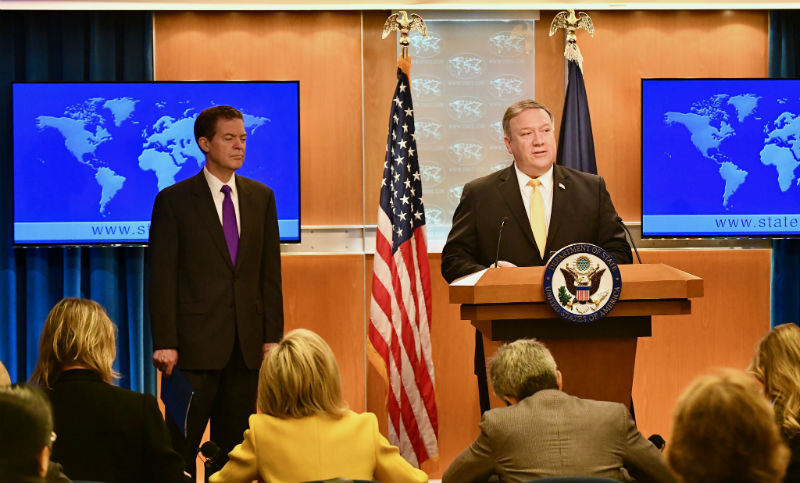 U.S. Secretary of State Mike Pompeo delivers remarks on the release of the 2017 International Religious Freedom Report, at the U.S. Department of State in Washington, D.C., on May 29, 2018. [State Department photo/ Public Domain]

Washington, DC — The State Department released its annual report on international religious freedom on May 29, 2018. The 2017 report to US Congress highlighted China’s continued denial of religious freedom in Tibet and the growing interference by government bodies and Chinese administrative authorities in the daily religious practices of Tibetan Buddhist monasteries and nunneries.

This year's report said: In "Tibet Autonomous Region and other Tibetan areas," the report says Chinese "authorities continued to engage in widespread interference in religious practices, especially in Tibetan Buddhist monasteries and nunneries."

"Across the Tibetan Plateau there were reports of forced disappearance, physical abuse, prolonged detention, and arbitrary arrest of persons due to their religious practice, as well as forced expulsions from monasteries, restrictions on religious gatherings, and destruction of monastery- related dwellings, according to media reporting and human rights organisations," the report says. The report also noted forced disappearance, physical abuse, prolonged detention without trial, and arrests of individuals due to their religious practices. It also reported increased repression around politically sensitive events and religious anniversaries such as His Holiness the Dalai Lama’s birthday in Tibet.

The report further touched on the issue of Chinese interference in the age-old tradition of selecting Tibetan reincarnate lamas and tulkus. “The government continued to exercise its authority over the approval of reincarnations of Tibetan Buddhist lamas and the supervision of their religious education,” it stated.

The report discussed the wave of Tibetan self-immolation protests, China’s demolition of Yarchen and Larung Gar Buddhist academies and the subsequent eviction of 11,500 monks and nuns. It also highlighted China’s subjection of Tibetan Buddhist monks and nuns to ‘patriotic re-education’, the official denigration of Tibetan spiritual leader His Holiness the Dalai Lama, societal discrimination encountered by ethnic Tibetans, travel restrictions imposed on Tibetan monks and nuns for pilgrimages, etc.

The report stated that U.S. officials repeatedly raised Tibetan religious freedom issues with Chinese government counterparts at multiple levels, such as the Chinese government’s refusal to engage in dialogue with the Dalai Lama. It also talked about the issue of access to Tibet for American diplomats and officials. “While diplomatic access to the TAR remained tightly controlled, three U.S. visits occurred: one consular visit in July and visits by the U.S. Consul General in Chengdu in April and November,” it said.

The annual report was released by Secretary of State Mike Pompeo and Sam Brownback, Ambassador-at-Large for International Religious Freedom: "U.S. officials regularly expressed concerns to the Chinese government at the highest levels regarding severe restrictions imposed on Tibetans’ ability to exercise their human rights and fundamental freedoms, including religious freedom and cultural rights."

Observing that Tibetan Buddhists continue to be in a very difficult situation, a top American diplomat Tuesday said that China remains a "very troubling" country on religious freedom. "Situation for Tibetan Buddhists that continues to be a very difficult situation for them ... for Christians, for Falun Gong practitioners. China remains a very, very troubling country on religious freedom," US Ambassador-at-Large for International Religious Freedom Sam Brownback told reporters during a news conference in Washington DC.

It covers everything from government policies violating religious beliefs and practices to U.S. policies to promote religious freedom around the world. "Religious freedom is indeed a universal human right that I will fight for," U.S. Secretary of State, Mike Pompeo said. "One that our team at the department will continue to fight for and one that I know President Trump will continue to fight for." Pompeo also announced plans to hold a “first-ever” ministerial meeting in Washington, D.C., on July 25-26, to bring together “like-minded countries” to discuss ways to protect religious freedom. “The ministerial will also be my first to host as secretary of state,” he added.

“The United States will not stand by as spectators,” Secretary Pompeo said during the press briefing at the State Department on Tuesday to introduce the latest annual international religious freedom report. “We will get in the ring and stand in solidarity with every individual who seeks to enjoy their most fundamental of human rights.”

According to the annual State Department report on International Religious Freedom, although Chinese authorities continued to block information about the number of self-immolations of Tibetan Buddhists, including Buddhist monks, media reported on six self-immolations and one instance in which a man in the Tibet Autonomous Region (TAR) committed suicide by slitting his throat.

"In February last year, the report said authorities in Xinjiang defined 26 religious activities, including some practices of Islam, Christianity, and Tibetan Buddhism, as illegal without government authorisation," the report further said, adding: "These regulations, which came into force April 1, stipulate that no classes, scripture study groups, or religious studies courses may be offered by any group or institution without prior government approval."