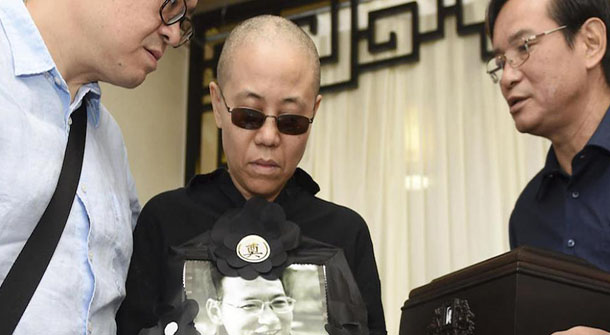 Paris, France — The Paris-based international media watchdog Reporters Without Borders (RSF) says it welcomes the release of the artist Liu Xia, Nobel peace laureate Liu Xiaobo’s widow, but urges the international community not to forget that more than 50 defenders of the freedom to inform are still detained in China.

The Paris-based global watchdog's comments came after almost eight years of living under house arrest and days before the anniversary of her husband’s death. "Finally freed by the Chinese authorities this morning, Liu Xia, 57, had been under house arrest in Beijing ever since her imprisoned husband, Liu Xiaobo, a recipient of RSFs Press Freedom Prize, was awarded the Nobel peace prize in 2010," the RSf said in a statement, adding: "He died in detention last year."

According to diplomats, she left Beijing on a flight bound for Helsinki, from where she was due to travel to Germany.

“RSF always fought for Liu Xia’s release and can only welcome this news,” said Cédric Alviani, the head of RSF’s East Asia bureau. “But it should not be allowed to eclipse the suffering that the Chinese authorities inflicted on her during eight long years of captivity, or the fact that more than 50 defenders of the freedom to inform are still languishing in Chinese jails.”

In May, the Berlin-based dissident Liao Yiwu released the recording of a phone conversation in which Liu Xia could be heard expressing her despair about the Chinese government’s refusal to let her travel to Berlin.

News of Liu’s release came one day after the German chancellor, Angela Merkel, met with the Chinese premier, Li Keqiang, in Bremerhaven, inviting speculation about whether the development was part of a broader diplomatic deal. China and Germany have in recent months become the two main targets of a US president threatening trade tariffs on industrial imports.

One of the last times she was seen in public was in July last year, when she scattered the ashes of her late husband at sea. While under house arrest, both of her parents died and she has been hospitalised at least twice for a heart condition.

"A statue to the memory of Liu Xiaobo is to be unveiled in Taipei by the “Friends of Liu Xiaobo” and RSF on 13 July, the first anniversary of his death," says Taipei Bureau Director Cédric Alviani.

"In order to highlight the very serious situation in Tibet, arbitrary arrest, detention, torture and sentencing of Tibetan citizen journalists, crackdown on advocacy of Tibetan language, religious repression and scuffling freedom of expression," the exiled media outlet the Tibet Post International says: It appears that many were convicted for “leaking state secrets to outside forces” and “engaging in separatist activities”.

"Since 2015, over 50 Tibetans have been arrested on suspicion of sharing or sending information about events in Tibet abroad, with many of them face up to 15 years' imprisonment for simply sharing information that is critical of state policies," it said, adding: "Some held in secret locations after being arrested. Chinese authorities continue to refuse to reveal any information about their current health condition and preventing them from contacting their relatives."