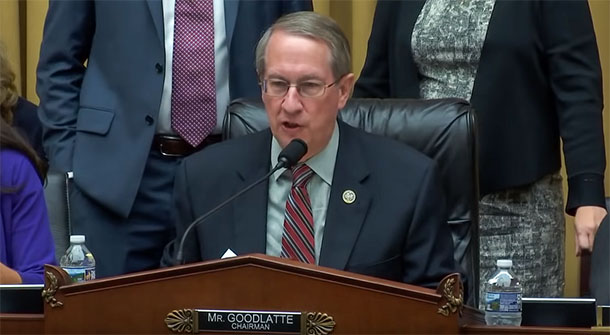 Washington, D.C. — The Reciprocal Access to Tibet Act took a big step forward when the House Judiciary Committee approved the bill unanimously. The next step is for the act to move to the floor of the House of Representatives.

House Judiciary Committee Chairman Bob Goodlatte (R-Va.) Wednesday delivered the following statement during the Committee’s markup of the Reciprocal Access to Tibet Act of 2017 (H.R. 1872). The Committee approved this bill by voice vote".

Chairman Goodlatte in his statement said, "H.R. 1872, the Reciprocal Access to Tibet Act of 2017, addresses an issue of longstanding and increasing concern regarding China’s treatment of Tibetans living in the Tibetan Autonomous Region (TAR) and other Tibetan areas controlled by China."

"In 1950, the Chinese People’s Liberation Army went into Tibet [Central Tibet] in order to establish control over the region. In the years since then, as noted by the U.S. Department of State, the Chinese Government “has imposed severe restrictions on Tibetans’ ability to exercise their human rights and fundamental freedoms,” the Committee said in a press release issued on July 25, 2018.

"Such restrictions occur with regard to religious practices, freedom to travel, freedom to practice cultural and language preferences, and other aspects of life," Goodlatte said.

"In addition, the Chinese government routinely engages in human rights abuses, such as extrajudicial killings, torture, and arbitrary arrests," Goodlatte added by saying: "In fact, the Chinese government’s actions are so severe that in recent years, over 150 Tibetans have self-immolated in a last ditch effort to get the rest of the world to focus on the problem."

"In order to prevent documentation of the religious freedom restrictions and other human rights abuses to the outside world, the Government of China has severely limited access by foreign nationals to the Tibetan regions," Goodlatte added to the statement.

"Such limitations prevent access to U.S. officials seeking diplomatic and consular access, journalists, human rights workers, and even tourists. When rare access is granted, activities are closely monitored by the PRC and information dissemination is restricted," Goodlatte further said.

The statement quoted the US-based advocacy group for Tibet, ICT President Matteo Mecacci, who noted in a recent report that the Chinese government is trying to restrict access to Tibet to a degree that exceeds even North Korea, where at least some foreign media are based. By contrast, international journalists, diplomats and civilians are almost always denied access to Tibet, a historically independent nation that China has occupied for nearly 70 years and rules with an iron fist.

"In fact, travel by Chinese nationals, including those with direct and substantial involvement in the formulation of policies to restrict access to Tibet, is routinely allowed by governments all over the world, including the United States," the Committee Chairman stressed.

According to the US House Judiciary Committee Chairman, "During FY 2017, for instance, nearly 1.5 million tourist visas were issued by the United States to Chinese nationals. And those visas are valid for ten years – during which the Chinese nationals can visit the U.S. multiple times. During that same period, the United States issued nearly 4,500 diplomatic visas to Chinese officials."

H.R. 1872 prohibits an individual who is “substantially involved in the formulation or execution of policies related to access for foreigners to Tibetan areas” from being granted a U.S. visa if the Secretary determines that;
1) the requirement for specific official permission for foreigners to enter the Tibetan Autonomous Region remains in effect; or
2) such requirement has been replaced by a regulation that has a similar effect and requires foreign travelers to gain a level of permission to enter the Tibet Autonomous Region that is not required for travel to other provinces in China; and
3) restrictions on travel by officials, journalists, and citizens of the United States to areas designated as ‘Tibetan Autonomous’ in the provinces of Sichuan, Qinghai, Yunnan, and Gansu of China are greater than any restrictions on travel by such officials and citizens to areas in such provinces that are not so designated.

"Any visa currently held by such individuals will be revoked under the bill," the Committee said, adding: "The bill then requires the State Department to report annually to the House and Senate Judiciary Committees as well as the House Foreign Affairs Committee and the Senate Foreign Relations Committee, on the number of actions taken regarding visas pursuant to the legislation."

The Chairman also quoted the State Department as saying, "in recent years there have been very small inroads made with regard to access to the Tibetan areas. And while some have expressed the concern that moving this bill could make the Chinese Government roll back some of those inroads, moving this bill is the right thing to do. It is time that Congress take a stand with regard to access by foreign nationals to the Tibetan regions."

"I want to thank Congressman McGovern for his work on this issue and I urge my colleagues to support the bill. I yield back the balance of my time," says Chairman Goodlatte.

One by one, other committee members spoke up at this morning’s hearing in support of the bipartisan legislation, which seeks to ensure that Americans are given the same access to Tibet that Chinese citizens have to the United States.

Under the Reciprocal Access to Tibet Act, Chinese officials responsible for discriminating against Americans who try to enter Tibet would be banned from entering the United States.

“If Chinese officials, journalists and other citizens are able to travel freely in this country, it’s only fair that their American counterparts are able to do the same,” Rep. Pramila Jayapal (D-Wash.) said.

Rep. Jerrold Nadler (D-N.Y.), ranking member of the Committee, said that the bill is important because it can help expose human rights violations taking place in Tibet.

“For Tibetans, restricted access to the region leaves them in virtual isolation from the rest of the world,” Nadler said, “while also precluding international witnesses to the Chinese government’s continuous violations of the Tibetans’ human rights,” which include arbitrary arrests, torture, heightened surveillance and severe restrictions on religious freedom.

Rep. Steve Chabot (R-Ohio) warned that “China is seeking to undermine the rules-based international order virtually every day.” Although China tries to keep the rest of the world out of Tibet, the Chinese government is sending a growing number of state delegations to Western countries and creating new state-controlled media outlets in capitals around the globe, including Washington D.C.

Rep. Zoe Lofgren (D.-Calif.) said the Reciprocal Access to Tibet Act would help make sure China’s relationship with the U.S. is fair and reciprocal.

The bill, which was introduced by Reps. Jim McGovern (D-Mass.) and Randy Hultgren (R-Ill.), now has more than 50 co-sponsors in the House. A companion bill was also introduced in the Senate by Sen. Rubio (R. – Fl.) and Sen. Baldwin (D. Wis.), and now has 8 co-sponsors.

In addition, Secretary of State Mike Pompeo recently expressed support for reciprocal access to Tibet for Americans in his statements to the House and Senate Foreign Affairs Committees.

The totalitarian regime in Communist China began their invasion of Tibet in 1949, reaching complete occupation of the country in 1959. Since that time, more than 1.2 million people, 20% of the nation's population of six million, have died as a direct result of China's invasion and occupation. In addition, over 99% of Tibet's six thousand religious monasteries, temples, and shrines, have been looted or decimated resulting in the destruction of hundreds of thousands of sacred Buddhist scriptures.