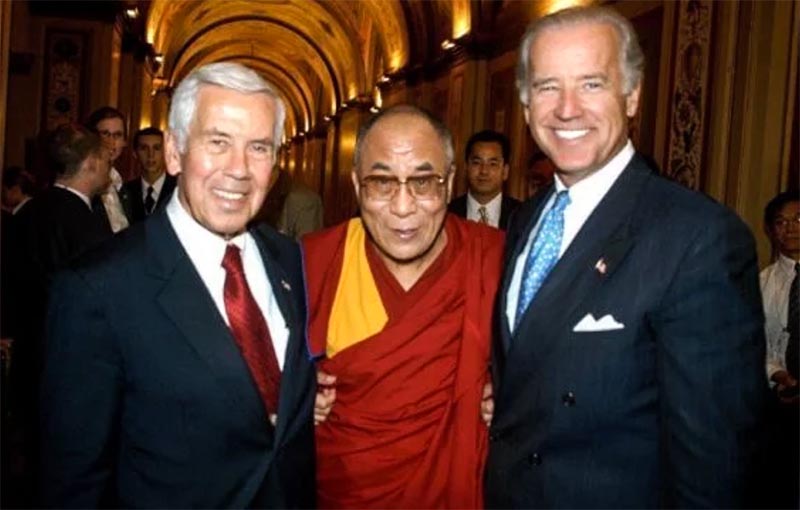 Senators Richard Lugar and Vice-President Joe Biden with His Holiness the Dalai Lama in Washington, D.C, United States of America. in 2003. Photo courtesy of ICT

Dharamshala— The spiritual leader of Tibet, His Holiness the Dalai Lama wrote to Mrs Charlene Lugar on Friday (May 2) to offer his condolences on the passing of her husband, former United States senator Richard Lugar.

A leading US voice on foreign policy for decades and consistent supporter of His Holiness the Dalai Lama and Tibet, Lugar died on Monday (April 29) from chronic inflammatory polyneuropathy, a neurological disorder. He was 87.

In a letter to Mrs Lugar, His Holiness said, “I am deeply saddened by the passing away of your husband, Richard Lugar. I offer my profound condolences to you and your children at this distressing time.”

“Senator Lugar devoted his life to the service of the American people and served with dedication. The fact that his colleague praises his bipartisan nature says a lot about the man he was.”

“As a Tibetan, I greatly appreciate his many years of support to the Tibetan cause, including in the meetings that I have had with Senators during my several visits to Washington, D.C. Support by him and his colleagues have been one of the sources of encouragement to the Tibetan people not to give up hope and to continue with our non-violent struggle for freedom,” His Holiness concluded.

Former Indiana Senator Richard Lugar was a foreign policy icon in the Senate and he had received the nation’s highest civilian awards for his efforts to secure and destroy weapons of mass destruction after the collapse of Soviet Union.

During his tenure in the Senate, he consistently supported the cause of Tibet, had several meetings with the Dalai Lama and challenged China’s misplaced policies toward the Tibetan people. Lugar served as a Senator from Indiana from 1977 to 2013. Prior to that, he was the mayor of Indianapolis.

Lugar supported many of the bills on Tibet and the Dalai Lama that came up in the Senate since the early 1990s, including the Tibetan Policy Act of 2002 and the Fourteenth Dalai Lama Congressional Gold Medal Act of 2007.

Following Chinese authorities’ heavy-handed clampdown on the protests in Tibet in 2008, Lugar came out with a statement on March 31, 2008 deploring China’s attempt to avoid responsibility and choosing “to attack the Dalai Lama and unfairly blame him for the protests.” His statement said, “I have met the Dalai Lama several times. I know him to be a man of peace.”

Lugar also had this message for the Chinese government: “They should address the root causes of the unrest, which are related to Tibetans’ growing belief that their culture, religion and economic status are under threat from Chinese policies. The Dalai Lama has sought to engage in meaningful dialogue with China, and has the moral authority to implement a durable solution.”

The Senator followed up during a hearing in April 2008 with Deputy Sec. of State John Negroponte by asking what the Administration was doing to encourage talks between the Chinese government and representatives of the Dalai Lama.

Lugar is survived by his wife Char, his four sons Mark, Bob, John and David and their families, according to the Washington-based International Campaign for Tibet.