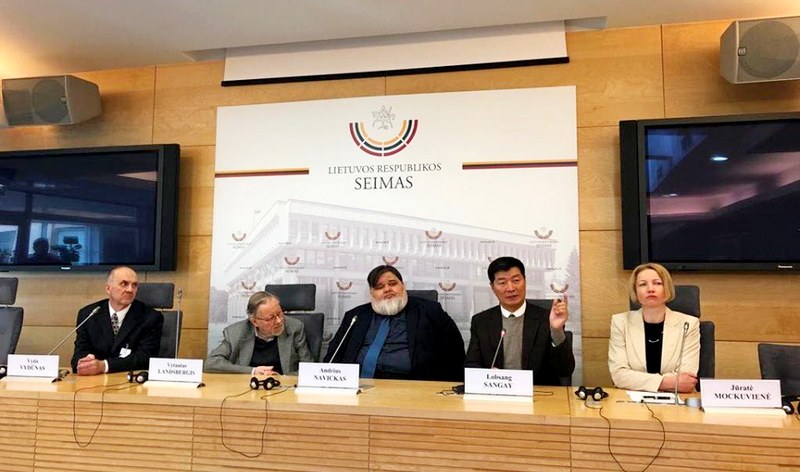 President of the Tibetan Government in-Exile, Dr Lobsang Sangay addresing the press conference organized by Andrius Navickas in the Seimas, Parliament of Lithuania, on May 7, 2019. Photo: TPI

Vilnius, Lithuania— President of the Tibetan Government in-Exile, Dr Lobsang Sangay’s visit to Lithuania once again triggered a wave of protests from the Chinese Embassy in Lithuania. President was on a two-day visit to Vilnius, the capital of Lithuania.

In a press release issued Tuesday afternoon, the embassy of China in Lithuania strongly opposed and openly condemned the press conference organized by Andrius Navickas in the Seimas, Parliament of Lithuania, on May 7, 2019.

President Dr Sangay was invited to address along with Prof Vytautas Landsbergis, Lithuania’s first head of state after its independence declaration from the Soviet Union, and other MPs Frustrated over President Sangay’s visit to Lithuania, the Chinese embassy declared the event as a ‘serious political incident’.

Drawing parallels between the experiences of the three Baltic states under the then Soviet Union’s communist regime and the Tibet experience at the press conference, Tibetan President Dr Sangay called on wider international community and Lithuania in particular to extend support for Tibet.

‘If you are for freedom, for human rights, for democracy, then you must support Tibet’, said Dr Sangay. His message resonated with the journalists present, as soon after the press event, media reports about Dr Sangay’s visit and his message started coming in. His visit and the Tibet issue was broadcast on Lithuanian national television on prime time for almost 4 minutes, drawing the expected condemnation from China.

The embassy representing the Chinese communist-authoritarian regime in the country further expressed that it would berate any organization that would attempt to provide a platform to discuss the Tibet issue.

Responding to the statements, Secretary Sonam Norbu Dagpo who is the spokesperson of the Tibetan government in-Exile said, “Central Tibetan Administration is appalled by the protest of Chinese Embassy in Lithuania against President Lobsang Sangay’s visit to Lithuania.”

On Tuesday, Secretary Dagpo responded, saying "President Lobsang Sangay is the democratically elected leader of the Tibetan people who represents the voice of the six million Tibetans. The world knows that China occupied and invaded Tibet and Tibetans do not enjoy religious freedom, human right, right to one’s own language, etc. in Tibet,” the Tibetan Spokesperson said.

President Sangay visited Lithuania on 6 May to call on wider international community and Lithuania in particular to extend support for Tibet where the President talked about the prevailing situation inside Tibet at the conference in Seimas which was organised by a Tibet support group headed by MP Andrius Navickas of parliament of Lithuania.

No sooner was the Press event concluded, news reports of Tibetan President’s visit to Lithuania and the press conference he addressed was broadcasted on Lithuanian national television on prime time for over 4 minutes. President Dr Sangay has given two interviews on the same day, one each for a popular internet and cultural media before flying to Riga, Latvia to attend the 7th World Parliamentary Convention on Tibet.