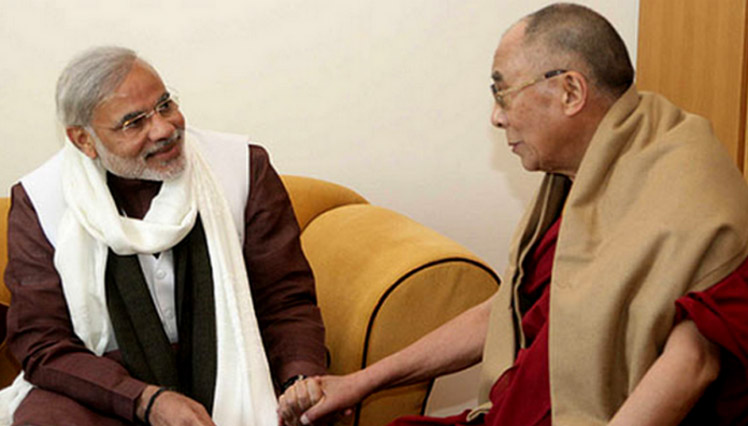 His Holiness the Dalai Lama with Narendra Mod. Photo: File

Dharamshala, India — The spiritual leader of Tibet, His Holiness the Dalai Lama, extended heartiest congratulations to Prime Minister of India Narendra Modi and the National Democratic Alliance (NDA) on its successful win in the Lok Sabha elections in India, the world's largest democracy.

India's Prime Minister Narendra Modi has been reelected to another five-year term. His National Democratic Alliance has won an absolute majority in Parliament, meaning it will have enough power to govern alone without having to build a coalition. Modi may be sworn in as early as this weekend.

With the announcement of the results of the Indian general election, His Holiness the Dalai Lama has written to the Prime Minister, Shri Narendra Modi, to offer his congratulations on his and the National Democratic Alliance’s success, according to the office of His Holiness the 14th Dalai Lama.

“It fills me with admiration and pride to see India, the world's largest democracy, emerging as a leader in the community of nations,” His Holiness declared. “India is one of the great ancient civilizations, a distinctive and fundamental feature of which has been ahimsa and karuna — non-violent conduct motivated by compassion," His Holiness wrote in a letter.

“ In addition to promoting an appreciation of the oneness of humanity and encouraging inter-religious harmony, I am committed to reviving interest in the ancient Indian understanding of the workings of the mind and emotions," the spiritual leader of Tibet said.

"I believe India is the only country that can successfully combine this ancient knowledge with modern education and ensure that people know how to achieve lasting peace of mind. The positive response I have encountered, especially among young Indians, in exploring such possibilities I regard as a sign of hope," His Holiness added.

“We Tibetans have tremendous respect for India as the source of our spiritual culture,” the Tibetan Buddhist leader continued, adding: “The traditions of Nalanda University brought to Tibet in the eighth century have had a powerful impact on our development".

"One highly regarded Tibetan master in the 14th century paid tribute to this when he said, “Until the light (knowledge) was brought from India, Tibet, even as the Land of Snows, remained in the dark,” the Buddhist leader added.

“Last month marked the 60th anniversary of our life in exile. I would like to take this opportunity to express the Tibetan people's immense gratitude to the Government and people of India," the Tibetan leader said while speaking about his escape to India after the communist Chinese occupation of Tibet, in 1959.

"It is due to India's consistent generosity and kindness to us that we have been able to preserve our ancient cultural heritage in exile," His Holiness added while expressing his deepest appreciation' to the Government and people of India.

In conclusion His Holiness wrote: “I pray you will be successful in meeting the challenges that lie ahead in fulfilling the hopes and aspirations of the people of India.”

The Indian Prime Minister Modi led the BJP to an epic victory on Thursday, with the party scoring 303 seats of 543 in the Lok Sabha and crushing the opposition. One of the big themes of the victory was "Do se Dobara (from two to twice)", which signified the BJP's rise from barely two seats in 1984 to a back-to-back mandate for power.