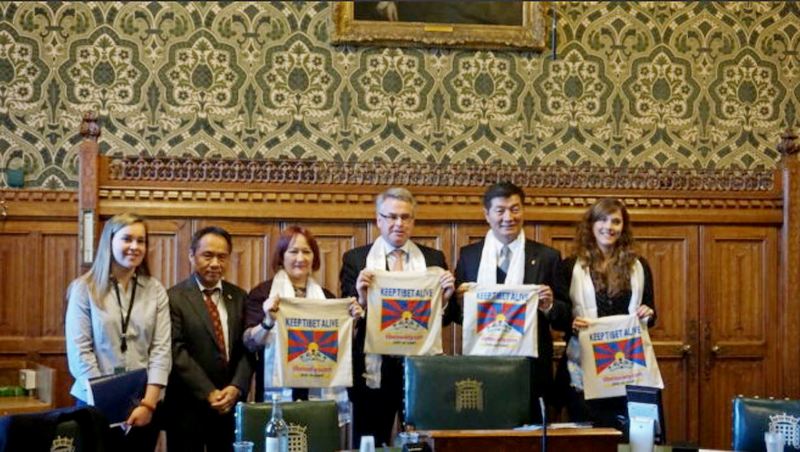 London — Chairman of the three major political parties in the UK and Conservative ex-minister Tim Loughton stood up in the House of Commons to speak for Tibet issues, by presenting the Tibet (Reciprocal Access) Bill, which would require an annual report to Parliament on the restrictions imposed on UK nationals visiting Tibet, and allowing those involved in imposing such restrictions to be denied permission to enter the UK.

On Tuesday, July 23, 2019, introducing the Ten Minute Rule Bill, the Conservative ex-minister Tim Loughton called on the UK government to replicate the US success of the Reciprocal Access to Tibet Act. “It may seem like a remote issue - but it’s an important principle for human rights of minorities throughout the world, and the Tibetans have suffered for far too long,” Loughton said.

"As Chairman of the APPG on Tibet, I have just presented a ‘Ten Minute Rule Bill’, which aims to emulate the ‘Reciprocal Access to Tibet Act’ that passed through the US Congress with cross-party support," he added.

"Today the attention is on Westminster and the leadership contest which has just seen Boris John elected as new leader of the conservative Party and tomorrow he becomes Prime Minister. But I am trying to create news for something happening in another part of the World, in a remote part of the World, in Tibet," he said.

"So, today in Parliament I have just presented what’s called a “Ten Minutes Rule Bill” in my capacity as Chairman of the All-Party Parliamentary Group on Tibet, and someone who has campaigned over years against the human rights abuses that are routinely waged on Tibetan citizens inside China and indeed on Tibetan national around the World," he said.

"Now just last November the US Congress passed what’s called ‘Reciprocal Access to Tibet Act’-this was passed with cross-party support, and even supported by President Donald Trump, and effectively it’s saying to the Chinese that if you do not allow people into Tibet, politicians, diplomats and others who wants to go and talk to Tibetan people-like our own ambassador who’s not been able to go to the Tibetan region since 2017," he further said, adding: "Then foreign nationals should be free to travel in Tibet, just as Chinese nationals are free to travels anywhere in the UK, the States or elsewhere in Europe," the UK MP said.

"We need people to be able to and expose some of the horrendous human rights abuses in Tibet that’s seen over a Million Tibetans lose their lives since the cruel invasion by China back in 1959-over 150 Tibetans have set fire to themselves in protest at the persecution going on, in Tibet," he added.

"Also the huge environmental damage that is being waged on the Tibetan Plateau which is becoming a dumping ground for toxic waste, where unsustainable mining and building of dams id affecting that sensitive eco-system up there which 40 % of the world’s population is served from water sources that rise in the Tibetan Plateau," Loughton stressed.

"So, my Bill would emulate in the UK, what the US has done. To say to China-you need to open up, we need to expose these human rights abuses, you need to treat Tibetans fairly around the world and within China itself, and if you don’t ,don’t expect the people responsible for that to be able to come to the UK," he further said.

The UK MP finally concluded by saying "It may seem like a remote issue-but it’s an important principle for human rights of minorities throughout the world, and the Tibetans have suffered for far too long and the rest of the world needs to call out China for its continued persecution of a peace-loving people of Tibet."

The President of the Tibetan government in-Exile, Dr Losabg Sangay recently referenced the Freedom House report that ranked Tibet as the least free country in the world behind Syria for consecutive years and called on the UK government to replicate the US success of the Reciprocal Access to Tibet Act.

The communist-totalitatarian regime in China recently imposed agressive and repressive policy to restrict access to Tibet for independent observers in order to maintain an iron grip in the region while at the same time avoiding any form of external scrutiny.

The routinely blocks access to Tibet for foreign journalists, NGOs, diplomats and foreign citizens of Tibetan heritage. Freedom House, an independent think tank that monitors and ranks annually the level of freedom and democracy globally, ranked Tibet again this year as the second least free region of the world, behind only Syria.

At the end of 2018, the US Congress passed the Reciprocal Access to Tibet Act, which calls for access to Tibet for American officials, journalists and tourists on par with the access their Chinese counterparts have to the US.

The Tibetan government in-Exile has repeatedly urged Chinese authorities to put an end to the closure and isolation of the Tibet, to guarantee the fundamental freedoms of all Tibetans and to allow unfettered access to Tibet. They also call on the United States to fully implement the Reciprocal Access to Tibet Act and to hold accountable the Chinese officials responsible for blocking access to Tibet.

'China continues to remain as the world’s worst abuser of press freedom and jails the largest number of journalists in its prisons,' Reporters Without Borders (RSF) said on July 13, 2019, adding 'China remains “the world’s largest prison for journalists”: Reporters without Borders'.

In its newly released 2019 World Press Freedom Index, Reporters Without Borders evaluated 180 countries in terms of journalistic freedom and the degree to which governments across the world censor their own press. China is ranked 177th, with only Eritrea, North Korea and Turkmenistan ranked worse.