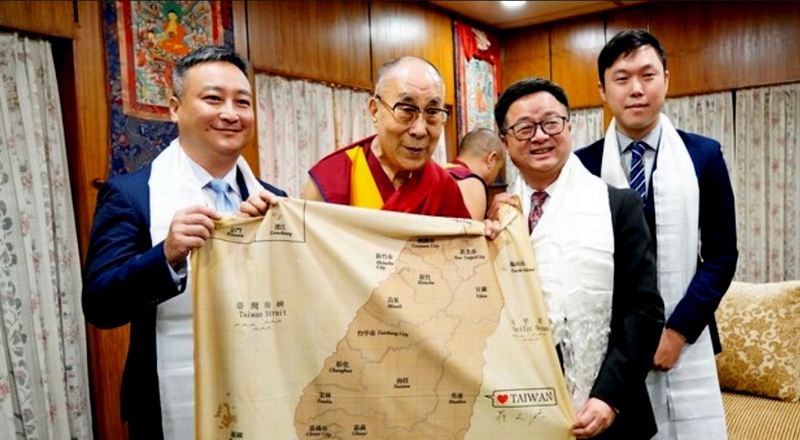 His Holiness the Dalai Lama holds the map of Taiwan with the delegation from Taiwan, at his residence in Dharamshala, India, on July 25, 2019. Photo: VOT

Dharamshala, India — "Democracy is the biggest strength of Taiwan," His Holiness told a delegation from Taiwan, while stressing the importance of the system of Democracy of Taiwan.

His Holiness the Dalai Lama's remarks were made during his meeting with the delegation from Taiwan led by Luo Wen Jia Secretary-general of the Democratic Progressive Party, at his residence in Dharamshala, July 25, 2019.

After an audience with His Holiness the Dalai Lama, Luo Wen Jia Secretary-general of the Democratic Progressive Party told the VOT that the Taiwanese delegation have particularly come to wish and greet His Holiness for his 84th birthday.

During the meeting which lasted for an hour, they discussed a variety of topics related to democracy and freedom, principal commitments of His Holiness the Dalai Lama, Religious harmony and Ancient Indian Knowledge. They also reportedly shared opinions on the nonviolent approaches to resolve the issue of Tibet and Taiwan, democratic developments in Taiwan, as well as to talk about Tibet's struggle for freedom.

His Holiness stressed the importance of 'the system of Democracy of Taiwan' and noted that 'Democracy is the biggest strength of Taiwan.' mainly exchanged opinions on democratic developments in Taiwan, as well as to talk about Tibet's struggle for freedom, he said.

Luo Wen Jia further said that His Holiness’s reincarnation was also discussed at their meeting where His Holiness stated that he will live for more than 100 years so there’s still time for the reincarnation.

As told by Luo Wen, His Holiness asserted that Chinese authorities have nothing to do with his reincarnation and that he will choose to reincarnate in a Buddhist country.

To this, His Holiness was asked if he would take rebirth in Taiwan. His Holiness reportedly replied that Taiwan being a Buddhist country, it is not impossible.

The Secretary-General of the Democratic Progressive Party, Luo wen Jia expressed his joy in meeting with His Holiness the Dalai Lama and described His Holiness as a very frank, jolly and humorous person.

He further commented that His Holiness is someone who holds great knowledge about everything. “He is a very sophisticated and knowledgeable leader,” said the Secretary-General.

The spokesperson of the Democratic Progressive Party Lii Wen said, “This is the first time for our delegation members to be in Dharamshala, we find the Tibetan democratic experience very inspiring for the Taiwanese People.”

“No matter how difficult circumstances are, we should remain firm and insistent in carrying out democratic institution and values of Democracy, human rights and freedom. This is inspiring for the Taiwanese as well as other people who are facing common challenges and threats from Chinese Communist Government including the people of Taiwan, Hongkong and Uigyur people as well in their own challenging situations. So we hope to encourage and promote more exchanges in various democratic experiences and their struggle amongst different people and areas who face common causes and challenges.

“We mainly came here to express our good wishes to His Holiness’ health and wish him a happy birthday since his birthday just passed recently. As for whether His Holiness will come to Taiwan or not, we respect the decision of Tibetan people and of course of His Holiness himself,” said the Party spokesperson.

The Democratic Progressive Party (DPP) is a Taiwanese nationalist and centrist political party in Taiwan. Controlling both the Taiwan Presidency and the unicameral Legislative Yuan, it is the majority ruling party and the dominant party in the Pan-Green Coalition.

Taiwan is currently facing a growing threat from China, Luo said, noting that in addition to protecting Taiwan's democracy, the country also hopes to assist other regions and countries fight for democracy.