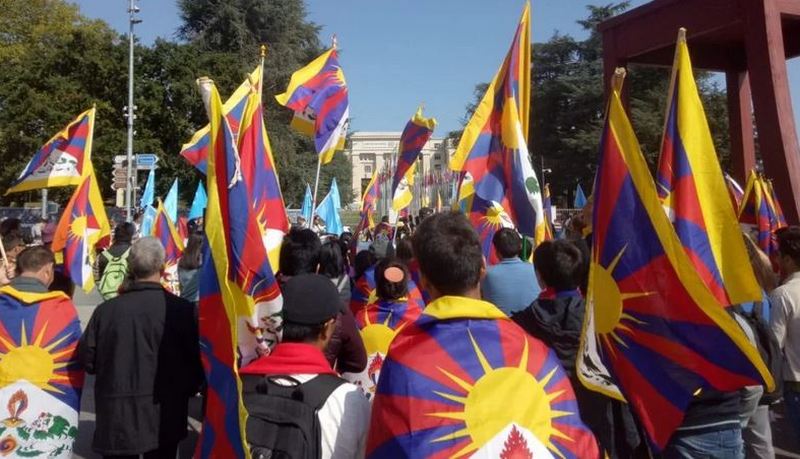 Hundreds of Tibetans hold a peaceful rally in front of the United Nations Office in Geneva, on September 20, 2019, over China’s unabated violations of human rights in Tibet. Photo: Tashi Namgyal/TCSL

'Paralleling the ongoing 42nd session of the UN Human Rights Council, hundreds of Tibetan in Switzerland & Liechtenstein, Belgium, and France held to protest against China’s unabated violations of human rights in Tibet and whined UN not doing enough in protecting the rights of Tibetans," according to the Tibet Bureau in Geneva.

The Tibet Bureau also said "Uyghur community members in Switzerland and Germany also joined the demonstration staged in front of the United Nations Office on 20 September 2019."

Holding Tibetan National flags with an enlarged banner that called “China: Open Tibet to UN High Commissioner for Human Rights Now”, in front of the United Nations office, Tibetans shouted slogan calling “release of all political prisoners in Tibet” “Let the Dalai Lama return to Tibet” and “Wake up! Wake up! UN”.

While addressing the mass demonstration, Representative Chhimey Rigzen, Tibet Bureau in Geneva, briefed an overview of ongoing UN Human Rights Council session proceeding including UN member states’ that have raised and expressed concern over the situation in Tibet during the session. He further added on behalf of UN-accredited NGOs, representatives, and Tibet groups have also raised the situation in Tibet several times, in the ongoing session.

“Under the guidance of His Holiness the Dalai Lama, unwavering courage and determination of Tibetans inside Tibet, the establishment of Central Tibetan Administration and support from the international community who continue to stand for freedom, peace, and justice, the issue of Tibet will be resolved”, said Representative Chhimey. China has, and will be failed in erasing the just cause of Tibet, he added.

In his conclusion, he called every single Tibetan to pay heed on strengthening the joint efforts in advancing Tibetan freedom movement; do not be distracted by trivial internal discord.

The appeal letter called the UN Office for Human Rights to constructively engage with China and critically assess the impact of development projects in Tibet. The appeal letter also urged the UN human rights mandate holders to press China to cease demolitions and mass evection of Larung Gar and Yachen Gar monks and nuns, push China to allow unfettered access to Tibetan areas and facilitate the earnest resumption of meaningful dialogue with the representatives of His Holiness the Dalai Lama.