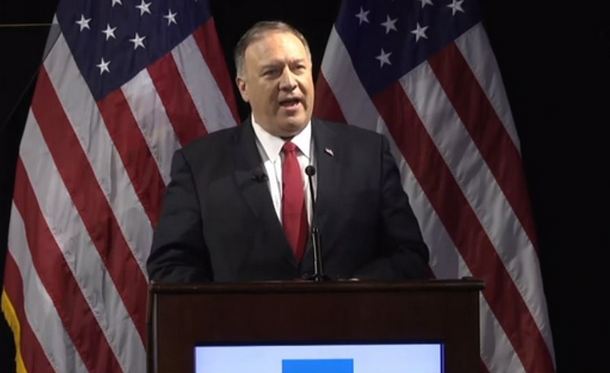 Washington, DC — "Today, we’re finally realizing the degree to which the Chinese Communist Party is truly hostile to the United States and our values, and its worse deeds and words and how they impact us. And we’re able to do that because of the leadership of President Trump," US Secretary of State Mike Pompeo Wednesday said, adding: "They were predictable byproducts of dealing with a secretive regime that doesn’t respect fairness, the rule of law, and reciprocity."

In that regard, Secretary Pompeo has previously warned of the danger of totalitarianism not only for our security but of our basic freedoms. When the state rules absolutely, he said, moral norms are crushed completely. The U.S. Secretary of State Pompeo also said that China is actively creating its own international space and it participates in international organizations to validate its authoritarian system and spread its reach.

Speaking at the Hudson Institute in New York, Pompeo announced a series of speeches over the coming months on the growing competition between the US and China. “I’ll talk about the competing ideologies and values and the impact that has on America and the world. The Chinese Communist Party is a Marxist-Leninist Party focused on the struggle and international domination,” he said.

Pompeo said: “We need only listen to the words of their leaders.” But Pompeo said that he didn’t want a “confrontation” with China. In fact, we want just the opposite. We want to see a prosperous China that is at peace with its own people and with its neighbors. … And we want to see a liberalized China that allows the genius of its people to flourish.”

"I thought I’d focus on something that is central to what the Trump administration is working on that is different from previous administrations. That’s not political, we have just – we have taken on the challenge from the People’s Republic of China in a way that the time is calling for," he said, adding: "Look, we have a long-cherished tradition of friendship with the Chinese people. We continue to do so today. We have a Chinese American community here in America that we love and treasure."

"But I must say that the communist government in China today is not the same as the people of China. They’re reaching for and using methods that have created challenges for the United States and for the world. And we collectively, all of us, need to confront these challenges from the PRC head-on, and along each of the many facets. There are many opportunities, to be sure, but it is no longer realistic to ignore the fundamental differences between our two systems and the impact, the impact that those two systems have, the differences in those systems have on American national security.

This is a departure, for sure. It might be viewed as unconventional. It’s not what you’ve heard from leaders for the last two decades plus. Frankly, we’ve been slow to see the risk of China – the risk that it poses to American national security because we wanted friendship with the People’s Republic from the very start. And because we, as Americans, always continue to hope for that. But frankly, in our efforts to achieve this goal, we accommodated and encouraged China’s rise for decades, even when – even when that rise was at the expense of American values, Western democracy, and security, and good common sense."

"We downgraded our relationship with our long-time friend, Taiwan, on the condition that the “Taiwan question” would be resolved peacefully, to normalize relations with Beijing. We all too often shied away from talking directly about the human rights issues there and American values when they came into conflict, and we downplayed ideological differences, even after the Tiananmen Square massacre and other significant human rights abuses.

We encouraged China’s membership in the World Trade Organization and other international organizations, premised on their commitment to adopt market reforms and abide by the rules of those organizations. And all too often, China never followed through. We hesitated and did far less than we should have when China threatened its neighbors like Vietnam, and like the Philippines, and when they claimed the entire South China Sea."

"Frankly, we did an awful lot that accommodated China’s rise in the hope that communist China would become more free, more market-driven, and ultimately, hopefully more democratic. And we did this for a long time. There’s another reason we adopted these policies: We didn’t realize how China was evolving. Frankly, the American people didn’t get the full story. I’ve talked to so many business leaders. U.S. companies that invested heavily in China were forced to comply with China’s terms. This includes just about any topic that the Chinese Communist Party deemed controversial.

Beijing’s intransigence creates a permanent class of China lobbyists in the United States. Their primary job is to sell access to Chinese leaders and connect business partners. And frankly, whenever there was a dispute or tension in the relationship, many of our scholars blamed the United States for misrepresenting the nature of the Chinese Communist Party."

"Meanwhile, Beijing controlled and limited access to our diplomats, journalists, and academics to the main – when they were traveling to mainland China. They still do that today. If you saw the difference – if you saw the difference in how Chinese diplomats are treated and how American diplomats and the access they have, you too would find the absence of reciprocity deeply inconsistent with American values.

And China’s state-run media and government spokespeople filled the gaps, routinely maligning American intentions and policy objectives. They still do that today. They distorted how Americans view the People’s Republic and how they review General Secretary Xi. These bad outcomes were all too predictable. They were predictable byproducts of dealing with a secretive regime that doesn’t respect fairness, the rule of law, and reciprocity."

"Today, we’re finally realizing the degree to which the Chinese Communist Party is truly hostile to the United States and our values, and its worse deeds and words and how they impact us. And we’re able to do that because of the leadership of President Trump. The President sounded this issue, this alarm, since his very first day. I remember one speech he gave back in Pennsylvania when he called China’s WTO membership “the greatest job theft in history.” A lot of people laughed. I don’t think so many of them are laughing now that they can see the reality.

It’s the case that now we know China weakens America’s manufacturing base by conducting massive intellectual property theft. I had a group of Fortune 500 CEOs in my office last week. The stories are staggering. Now we know too that China threatens American freedoms by demanding our companies self-censor to maintain access to that Chinese market. We’ve all seen the stories recently of the NBA. The truth is Beijing ought to be free to run its own PR campaign; they’re a sovereign nation. But if we disagree, our companies ought to be permitted to have that disagreement. Silencing dissent simply is not acceptable."

"And now we know – how we know that China threatens America’s national security by developing asymmetric weapons that threaten our strategic assets too. The list goes on. And these aren’t just our problems. They’re problems for all nations that share our values. When we see Beijing use coercion as a preferred tool of statecraft, it’s not good for those of us who believe in democracy and sovereignty as the fundamental norms that ought to dominate world commerce and the way nations interact. These ideas, they threaten the free and open international order by making extrajudicial territorial and maritime claims in places like the South China Sea and the Taiwan Strait.

We know too that Beijing entwines its neighbors and others in its state-led economic model, often closing deals with bribes, often trapping many in debilitating debt levels, threatening their own sovereignty. And now we know too and we can see China’s regime trampling the most basic human rights of its own citizens – the great and noble Chinese people. We’ve seen this in Hong Kong, where they need to live up to their promises and commitments, and we’ve seen it in the gross human rights violation of ethnic minorities in Xinjiang."

President Trump’s National Security Strategy lays this out. It recognizes China as a strategic competitor. That means there are challenges and there are real opportunities, and we hope that we can engage with them in ways that are constructive. But it’s a reality. It’s the truth. It’s also the case that we didn’t choose some of these issues. China forced them upon us.

In the coming months, I’m going to give a series of sets of remarks. I’m going to talk about each of these in some more detail. I’ll talk about the competing ideologies and values and the impact that has on America and the world. The Chinese Communist Party is a Marxist-Leninist Party focused on struggle and international domination. We need only listen to the words of their leaders.

I’ll discuss too how they interfere with the things we take most for granted here in the United States. The party’s intelligence agencies, the United Front Work, and its propaganda outlets have embarked on a global campaign to change public opinion in favor of Beijing. We want to preserve our freedoms – our freedom of speech and we want to make sure that information flows freely everywhere."

And I’ll too – talk too about the economy. China has engaged in unfair predatory economic practices and it’s utilizing state assets to build its economic footprint all around the world. We want China to be successful. We want it to have a successful economy. We want a transparent, competitive, market-driven system that is mutually beneficial for all involved.

"You can see the first steps towards that in the Phase 1 deal that we are close to signing. I’m optimistic we’ll get there. It’s a good thing, a place that we can work together. We want to make sure that we get that right and we want to make sure that the economic relationships are fair, reciprocal, and balanced as between us as well. I think this will show that there is common ground to be had, and the Trump administration will work tirelessly to find it wherever we can.

And I’ll get a chance too to talk about how our militaries compete and the capabilities that China has built up that far exceed what they would need for self-defense. There’s lots of discussion, lots of think-tank discussion, lots of academic discussion about what the relationship will look like between the United States and China in the years and decades ahead. I’ll be clear about what the United States wants: We don’t want a confrontation with the People’s Republic of China. In fact, we want just the opposite.

We want to see a prosperous China that is at peace with its own people and with its neighbors. We want to see a thriving China where the Chinese business community transacts business with the rest of the world on a fair set of reciprocal terms that we all know and understand. And we want to see a liberalized China that allows the genius of its people to flourish.

And we want to see a China that respects basic human rights of its own people, as guaranteed by its own constitution. But above all, it’s critical that as Americans, we engage China as it is, not as we wish it were. Herman Kahn used to remind us, he would urge us to think unconventionally to create persuasive arguments for policy and make those arguments consistently to the American people."