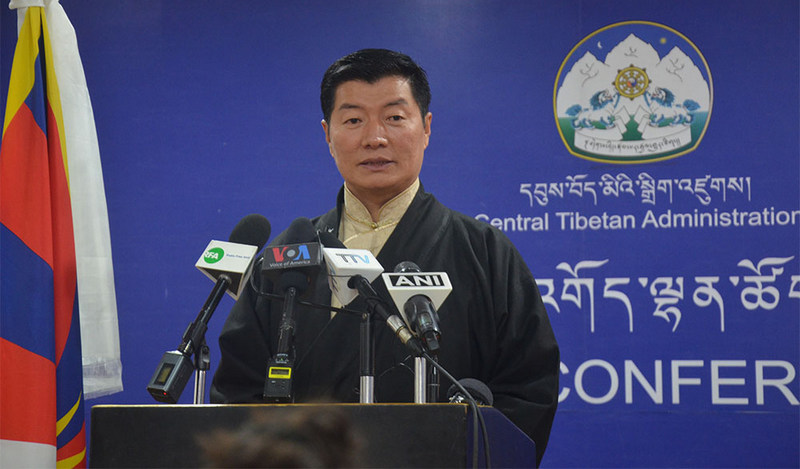 President speaking to members of the media on the recently passed U.S. Tibet bill with overwhelming bipartisan support, during a press conference in Dharamshala, India, on January 29, 2020. Photo: TPI/Yangchen Dolma

Dharamshala, India — The Central Tibetan Administration (CTA) thanked the U.S. House of Representatives for passing a bipartisan bill to update and strengthen the Tibetan Policy Act of 2002 and address the ongoing oppression of Tibetans in Tibet by the Chinese government. The Bill was passed on January 28, 2020, with overwhelming majority of votes of 392, to hold China accountable for Human Rights abuses in Tibet.

Dr Lobsang Sangay, the President of The Central Tibetan Administration (CTA), previously known as Ganden Phodrang, the government of Tibet was speaking at a press conference held at the DIIR Lhakpa Tsering Hall in Dharamshala, India, on 29th January 2020.

On the passing of the bipartisan Bill, Dr Sangay mentions, “I would like to thank the US House for passing the Tibet Policy and Support Act 2019 with an overwhelming majority votes. This sends a very strong message to the Chinese government that the support for Tibet in America is as strong as it used to be since 2002 when the first Tibet Policy Act was passed.”

The President specifically sends his thanks to honorable Speaker Nancy Pelosi, Congressman Jim McGovern and Congressman Chris Smith for co-sponsoring the Bill and other longtime friends and supporters of Tibet including Republican Congressman Ted Yoho who spoke strongly in favor of the Bill in the House as well as others.

House Speaker Nancy Pelosi strongly supports the Bill and heard quoting, “As Sikyong Dr Lobsang Sangay, the president of the Central Tibetan Administration has said the very survival of Tibetan culture and identity is in peril. If we don’t speak out for Human Rights in China because of commercial interest, then we lose all moral authority to speak out for Human Rights anyplace in the world.”

This Bill is a message to the international communities to signify the importance of Tibet from the environmental point of view as the world's third pole, stresses the Tibetan leader. He also reminds us that this Bill is a call for China who had been pressurizing around the world on Tibet in the agreements signed with Nepal and recently with Myanmar where Tibetan provision is included specifically.

This is good news for the Tibetans which indicates that American people are with them, he says.

The new Bill includes environmental issues, religious freedom and reincarnation issue, CTA and democratization as per the vision of His Holiness the 14th Dalai Lama, the funding for Tibetans inside and outside Tibet, the politically elected leader emphasizes.

The new bill also amends the International Religious Freedom Act of 1998, the Foreign Relations Authorization Act, Fiscal Years 1990 and 1991 and the National Defense Authorization Act of 2000 to include references to the reincarnation issue and the strategic importance of Tibet’s waters and to require separate sections on Tibet in reports on religious freedom.

Highlighting the need for an American diplomatic presence in Tibet, the Bill mandates that the Secretary of State will “not authorize the establishment in the United States of any additional consulate of the People’s Republic of China until such time as a United States consulate in Lhasa, Tibet, is established.”

The Bill also says that all Tibetan areas should be under one consular district of the US Embassy in China. Currently, Tibetan affairs are handled by multiple consulates.

The Bill details the democratic transformation of the Tibetan governance system in exile by the Dalai Lama and commends him “for his decision to transfer political authority to elected leaders in accordance with democratic principles.” The Bill also says the Central Tibetan Administration legitimately represents and reflects the aspirations of Tibetan people around the world.

The new Bill would also deepen US diplomatic support for the Tibetan people. The Bill expands the role of the special coordinator for Tibetan issues, a position in the State Department that is currently unfilled.

Under the Bill, the special coordinator will have the additional responsibility of encouraging the Chinese government to address the legitimate grievances of the Tibetan people and promote Tibetans’ basic rights and religious freedom. In addition, no fewer than three people will be assigned to work in the special coordinator’s office.

Specifically, the Bill updates the objectives of the Special Coordinator for Tibetan Issues to include “promote substantive dialogue without preconditions between the Government of the People’s Republic of China and the Dalai Lama or his representatives or Central Tibetan Administration representatives leading to a negotiated agreement on Tibet.”

The Bill would also allow for the allocation of development assistance funds for the skilled development, entrepreneurship and cultural preservation of Tibetan exiles in South Asia and requires the secretary of state to urge the government of Nepal to provide legal documentation to long-term Tibetan residents who fled persecution in their homeland.

The Bill identifies many of the major environmental crises occurring in Tibet under Chinese rule, from melting glaciers to a rate of warming more than twice the global average. The Bill acknowledges that Tibet plays an essential role in providing water to surrounding countries in Asia, meaning that a water shortage beginning in Tibet could impact the lives of more than 1 billion people.

As such, the Bill requires the secretary of state to encourage a regional framework on water security and to pursue collaboration with China and international institutions to monitor the environment on the Tibetan plateau. The secretary will also have to engage China and NGOs to encourage the participation of Tibetan nomads and other Tibetans in the development and implementation of grassland management policies in Tibet, in order to utilize their indigenous experience.

The Bill also states that development projects supported by the US and international financial institutions and organizations should not an incentive or facilitate the forced relocation of Tibetan nomads. In addition, the State Department will be required to assist US companies and individuals operating in Tibet to ensure their work addresses the Human Rights of the Tibetan people.