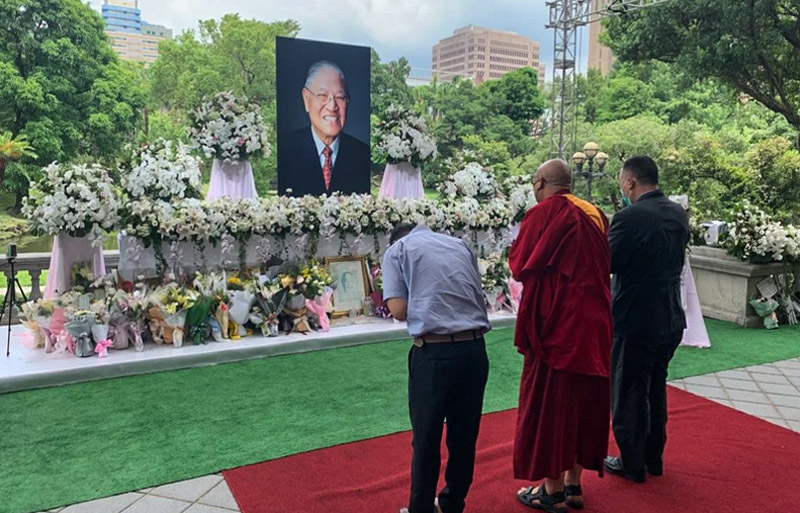 Taipei — A Tibetan delegation led by Dawa Tsering, Representative of His Holiness the Dalai Lama to Taiwan, visited the memorial site and paid tribute to the former leader of Taiwan, the nation’s father of democracy, late Lee Teng-hui, who died late last month.

The death of Lee Teng Hui, Taiwan’s father of democracy has been met with tough emotions and an outpouring of condolences from leaders of the world including the Tibetan spiritual and political leaders, His Holiness the 14th Dalai Lama, President Dr Lobsang Sangay, and Speaker Pema Jungney.

A delegation led by "Representative Dawa Tsering earlier today visited the memorial site built in the memory of late Lee Teng Hui, Taiwan’s father of democracy and paid respect," the Office of Tibet, Taiwan said in a report, on Tuesday, August 11, 2020.

The Office of Tibet expressed its deep sorrow over the death of the former leader of the country, saying "His demise was a great loss not only for the people of Taiwan but for all the freedom and democracy-loving people."

The Office concluded by saying that "His Holiness offered his condolence to the family of the late Lee Teng Hui as well as Sikyong Dr Lobsang Sangay of the Kashag and Speaker Pema Jungney of the Tibetan Parliament in Exile."