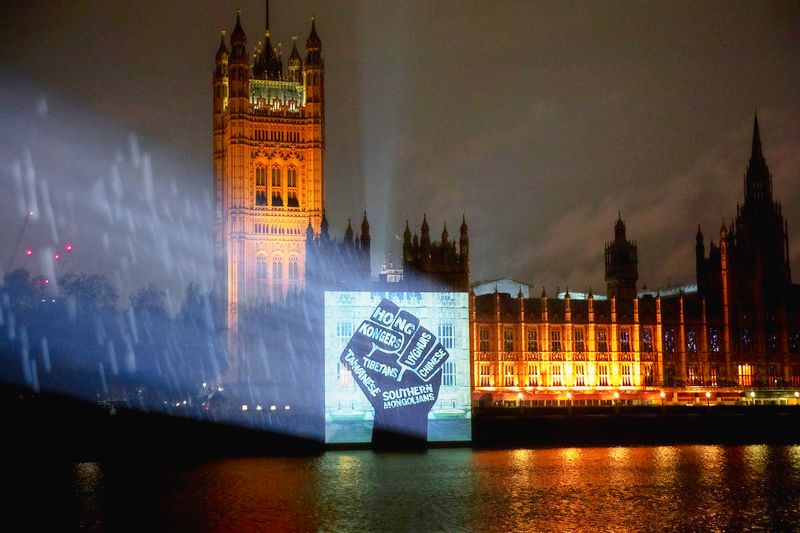 London — A group of activists carried out a nighttime projection onto the Parliament building in London last night, broadcasting a video onto its side that called for the UK government to take action against China’s human rights abuses.

The video played on the Palace of Westminster at around 10 PM. It showed Tibetan, Uyghur, and Hong Kong representatives detailing the human rights abuses their peoples face under Chinese occupation, John Jones, campaigns and advocacy manager, Free Tibet, UK said in a media release, 1 October 2020.

The video expressly called on the UK government to be firmer in its opposition to the Chinese Communist Party, opening with the question: “When will the UK resist China?”’ and then highlighting a range of human rights abuses, including stories of forced sterilisations of Uyghur people, a crackdown on pro-democracy demonstrators in Hong Kong, and a report released last week on over 500,000 Tibetans being displaced from their lands and coerced into “militarised vocational training”.

This was followed by video footage of Pema Yoko, from the Tibetan Community in Britain, Zumretay Arkin, from the World Uyghur Congress, and Frances Hui, from We The Hongkongers, each of whom talked about the experiences of their nations and peoples under CCP rule.

The video called on the UK government to impose targeted sanctions on Chinese officials found to be responsible for human rights abuses. Later that night, a second projection was displayed on the Tower of London, showing a fist with the names of nations and peoples living under CCP repression. China is due to relocate its UK embassy to a building opposite the Tower of London in a plan that has sparked concerns among councillors in Tower Hamlets.

The stunts kicked off a Global Day of Action in which activists in over 90 cities around the world marked the anniversary of the founding of the People’s Republic of China by showing opposition to the ruling Chinese Communist Party, and solidarity among Chinese human rights defenders, Tibetans, Uyghurs, Hong Kongers, Southern Mongolians, and Taiwanese. The activists aim to highlight the threat posed by the CCP to communities living under its rule, and how the CCP’s policies threaten freedom, democracy, and human rights around the world.

The projection was jointly organised by Free Tibet, Tibet Network, Tibetan Community in Britain, and the World Uyghur Congress. In July, these groups collaborated to carry out a series of stunts across London, including a projection onto the Chinese embassy, where they broadcast the messages “China Fails Freedom” and “Free Tibet, Free the Uyghurs, Free Hong Kong” onto the front of the building.

Pema Yoko from the Tibetan Community in Britain said, “70 years of China’s repressive policies and a severe and worsening security crackdown have created a crisis in occupied-Tibet. China’s President, Xi Jinping is showing few signs of reviewing the Communist Party’s harsh policies in Tibet, in fact, under Xi’s rule Beijing has tightened its grip on public security, and restrictions on communications in Tibet have been stepped up in an effort to cut Tibet off from the rest of the world. The UK government cannot wait any longer; it must take strong, bold action now to hold China accountable for its serious human rights abuses.”

Zumretay Arkin from the World Uyghur Congress said, ‘’the human rights situation in China is at its most critical point: Uyghurs, Tibetans, Southern Mongolians, Hongkongers, Taiwanese are directly being impacted by the Chinese government’s genocidal and repressive policies. When millions of people are being arbitrarily interned or forcibly disappeared and their fundamental rights being stripped away, how can we as human beings stay silent? We have the power to change things, along with the international institutions and actors, we must all unite forces to end this ongoing repression carried out by the Chinese Communist Party. Universal human rights are not privileges, they are rights that everyone must have access to.’’

Frances Hui from We The Hongkongers said, “China is continuously violating the basic human rights and freedoms of the Hong Kong people, as seen from China’s ongoing crackdown of activists, protestors and the press. The forceful introduction of the National Security Law completely disregards the Sino-British Join Declaration; compounded by the genocide of Tibetan and Uyghur minorities, China shows no respect towards international regulations and basic human principles. These principles must be firmly upheld, as they are synonymous to the national interests of the UK. The UK must forge a resolute foreign policy to stand with the people of freedom and the oppressed. The Parliament must unite in this time of great crisis, to call China out through the international community, and impose appropriate sanctions upon responsible officials.”

John Jones from Free Tibet said, “the CCP may think it is all-powerful, but tonight has proven once again that it can do absolutely nothing to stop us joining forces and challenging its grotesque policies, which are ruining millions of lives. Nor can it stop the shift in global opinion, as more and more people, from journalists to politicians to the public, realise how dangerous the CCP is. Until the abuses stop, we will not stop.

“But it is important to note that tonight we also challenged the UK government - it is time for our government to take a firm stance against the CCP and to take bold, concrete action in support of Hongkongers, Tibetans and Uyghurs, and other groups who demand their freedom.”