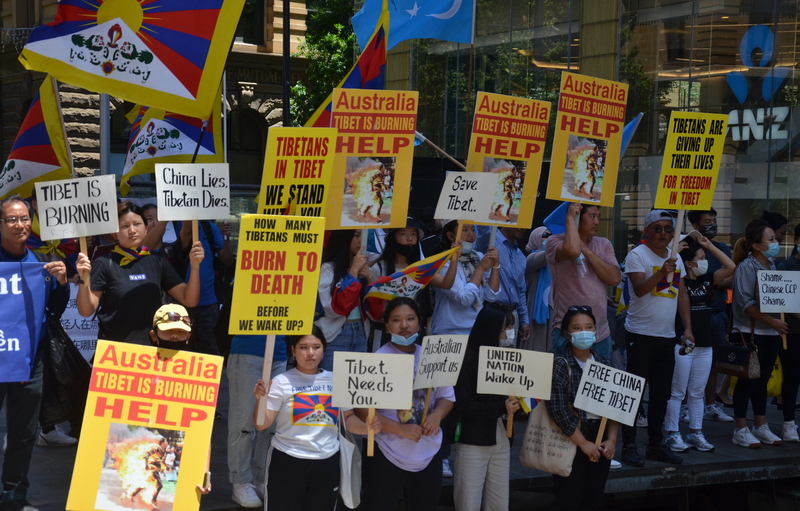 Tibetans and supporters raising flags and banners during their rally at Martin Place in the heart of Sydney, NSW, Australia, on December 10, 2020. Photo: Yeshe Choesang

Sydney — To mark Human Rights Day in Sydney (10 December), hundreds of people including Chinese, Tibetans, Vietnamese, Uyghurs, Hong Kongese people, and supporters gathered for a rally at Martin Place in the heart of Sydney, to protest against genocide and human rights violations committed by the totalitarian communist regime in China.

The event was organised by the Regional Tibetan Youth Congress (RTYC) along with the coordination of several other organisations based in Australia and hosted by Rigzin Youthon and Sophie Xiao. Several Human Rights and democracy activists including famous Australian Human Rights activist Drew Pavlou, were invited to speak up on the ongoing crackdown on basic freedoms in China, threatening democracy and international law.

"I am here today simply to say I am with my Tibetan brothers and sisters, and all people who are victimised and persecuted by the Chinese government. This is a totalitarian dictatorship responsible for terrible atrocities against human lives, and human dignity," said Drew Pavlou, a famous Australian activist, best known for his criticism of the authoritarian communist regime in China.

"So I am here today to stand with Uighurs, Tibetans, Hong Kongese, Falun Gong practitioners, Taiwanese, ordinary Chinese people, and all other victims of the Chinese Communist Party's terrible dictatorship, and their complete disrespect for human life. So I would say. I think the people of Tibet are brave and independent people with beautiful cultural traditions of their own, and they are one of the most persecuted peoples in the world today because the Chinese government is attempting to wipe out their culture as attempting to tempt them to destroy their own culture and destroy their people in their own homelands," said Pavlou.

The 21-year old Australian activist addressed a large crowd of protesters gathered at Martin Place located in the heart of Sydney on Thursday. "We know what is happening to our Uighur brothers and sisters. There are two million Uighur Muslims in concentration camps and there are state-sanctioned rapes, sterilisation, and abortions that meet all the whole marks of genocide and it is an attempt to wipe out the Uighur people."

"Now, we acknowledge that it's our responsibility as Australians to speak up for these human beings who are being threatened. We cannot stay silent as they face oppression, we cannot say fine as they face genocide and destruction under the Chinese Communist regime. As Australians, we don't want to have a friendly relationship with a government that is a totalitarian dictatorship, a government that is managing genocide against Tibetans and destroying democracy in Hong Kong.

We do not want a situation where Australians are profiting from genocide. We have Australian billionaires profiting from genocide in China with their links to the CCP and Chinese state-owned companies, it's not good. We demand better, the Australians are right here today. We demand freedom for Tibet, Hong Kong, and Uighurs. We put Human Rights first in our relationship with China. That is our number one priority for safety and the protection of Uighurs, Tibetans, and Chinese people.

Protesters strongly criticised the CCP's mishandling of the global pandemic outbreak, saying the deadly coronavirus emerged in China and has spread throughout the world, causing a pandemic because the CCP deliberately covered-up the outbreak in Wuhan. China is responsible for over 1 million deaths and more than 40 million cases reported globally.

Taking Tibet as an example he pointed out, "Tibetans are enslaved and ruled by tyranny even in their own homeland and their own country, so where are their human rights? Under the premise of tyranny, none of our human rights are guaranteed, so our fight for human rights today requires the elimination of that root cause that endangers human rights before our human rights goals can be realised."

Speaking to the TPI at the rally, the President of the RTYC, Tsundu Oser said: "Since the Chinese Communist virus is still ravaging the world, the Australian government limited the number of people at the rally to 250 in order to prevent the pandemic, so the number of people attending the rally was naturally much lower than last year. The event on 'International Human Rights Day' has a certain significance, aiming to make world leaders pay serious attention to the poor human rights situation under the tyranny of the Chinese Communist Party, and to jointly sanction and end the crimes against humanity of the Chinese Communist Party."

He said that overseas Tibetans, as the spokespersons of Tibetans inside the country, have been speaking out for Tibetans suffering inside the country for over 60 years with the help of important commemorative events and international platforms, exposing the atrocities of the CCP: "The CCP has long trampled on human rights and deprived Tibetans of their freedom, and also created fake news and infiltrated into the political, economic, military, scientific and technological, educational and media fields of countries around the world in an attempt to control the world. These evils need to be stopped urgently, so it is extremely important that world leaders wake up and work together to confront the Chinese Communist threat."

Speaking to the crowd at the rally, Raimond Kelly, who recently staged a solitary protest outside the Chinese consulate in Sydney, also strongly condemned the Chinese government over its atrocities against ordinary Chinese people, Tibetans, and Uighurs.

Protesters strongly criticised the CCP's mishandling of the global pandemic outbreak, saying the deadly coronavirus emerged in China and has spread throughout the world, causing a pandemic because the CCP deliberately covered-up the outbreak in Wuhan. China is responsible for over 1 million deaths and more than 40 million cases reported globally.

Protesters then marched to the Chinese Consulate in Sydney to continue their rally after a beautiful classical music showcase performed by a group of artists from the Falun Dafa. Please click on the links to access the event photos by the TPI photographer: Gallery 1 and gallery 2.