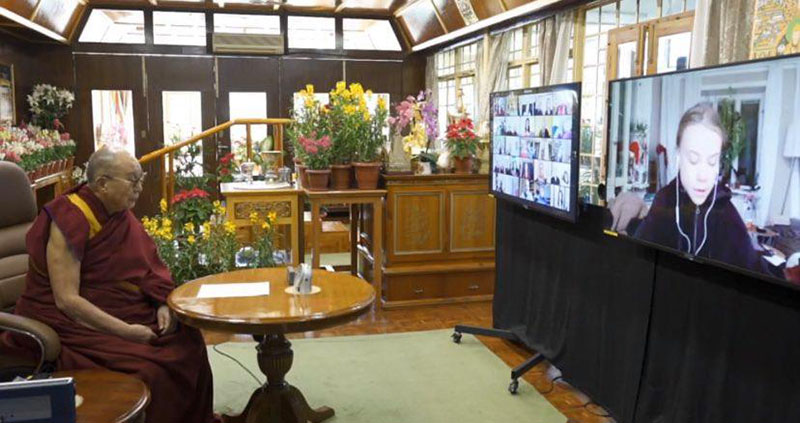 His Holiness the Dalai Lama, at a virtual conference with environmental activist Greta Thunberg, and two leading scientists, William Moomaw and Susan Natali on January 10, 2021.

Dharamshala, India— “The younger generation is our hope. Past is past, the future depends on the younger generation,” said His Holiness the 14th Dalai Lama, at a virtual conference with environmental activist Greta Thunberg, and two leading scientists, William Moomaw and Susan Natali on January 10, 2021. They discussed climate change and global warming.

His Holiness the Dalai Lama was invited to participate in a dialogue with the young environmental activist, Greta Thunberg, where the aim behind this conversation was to raise awareness about climate change and global warming. Diana Chapman Walsh, the moderator welcomed His Holiness and told him that seeing two extra-ordinary human beings to have a dialogue about a serious concern is a great pleasure.

The goal of the online conference was to raise awareness about concepts such as climate feedback loops, heightening a sense of urgency and to offer promising solutions. The problems were addressed in three aspects: Science, Secular ethics and Social actions. The event was also an official launch of different short films called Climate emergency feedback loops.

The moderator mentioned His Holiness’s new book, Our Only Home and the letter that he wrote to Geta Thunberg on May 31, 2019. “I am also an ardent supporter of environmental protection. We, humans, are the only species with the power to destroy the earth as we know it. Yet, if we have the capacity to destroy the earth, so, too, do we have the capacity to protect it. It is encouraging to see how you have opened the eyes of the world to the urgency to protect our planet, our only home. At the same time, you have inspired so many young brothers and sisters to join this movement,” mentioned His Holiness in the book.

“When I heard the young lady was thinking about the environment, I admired it. It is really encouraging for the younger members of society for showing a genuine sense of concern for the environment and the planet. Everybody wants happy lives, not only human beings but all species. For that, everyone is concerned about their existence. The human brain is remarkable. But still judging in a way, we have been the most trouble makers too. Human beings in one way have created good things but also are responsible for a lot of problems today. Imbalance in ecology, is one of our creations,” said the Tibetan spiritual leader while outlining the importance of young activists like Greta and briefly mentioned that it is the fundamental duty of human beings to understand their responsibility towards nature and the planet.

“First, we are human beings, then comes our country and finally our families. But in reality, this is quite the opposite, the individual's life depends on the family/community. But we belong to a larger community and i.e. humanity. Thinking about a smaller circle is unrealistic, it's about 7 billion human beings and our lives depend on each other,” he added. The moderator soon asked Greta Thunberg to express her views and concerns regarding the lack of awareness for climate change while highlighting the admiration that people have for young people like her. “This speech is very dramatic. My experience is that there is a huge lack of awareness and that science is not being discussed enough and brought into conversations. We need to tell people what is happening right now. Most of them don't know about feedback loops, chain reactions. They are also crucial to understand how the world functions and how complex everything is. Our actions have consequences. We have such a lack of respect for nature that we don't think there are consequences for our actions,” she said while pointing out the problems and concerns regarding different concepts that are yet to be brought into regular conversations.

“We have to think seriously about the new situation and our lifestyle. We have to think about today’s reality. Through education and young leaders like Greta Thunberg, we can be able to raise awareness among people. Things have become more serious but we have been taking them for granted. We need to think about reality and then figure out a way to project that. I think leaders like her is a sense of hope for everyone. The younger generation is our hope. Past is past, the future depends on the younger generation,” the Nobel Peace Laureate concluded.

The scientists touched important issues such as how the global heating from fossil fuel emissions and deforestation is accelerating the natural processes that threaten to spin out of control. They ensured to raise maximum awareness with the help of videos and explained the unknown concepts in a much simpler manner. They also showed if humankind works urgently and intelligently, then over time nature will use its own best technologies to store excess carbons in the ground.

Diana thanked His Holiness for highlighting the issues with people. She also thanked Greta and the scientists for their valiant efforts to educate people about these difficult concepts. His Holiness’ concluding advice was to start educating young people about the concerns to bring about a change and ensure that the future generations do not suffer.