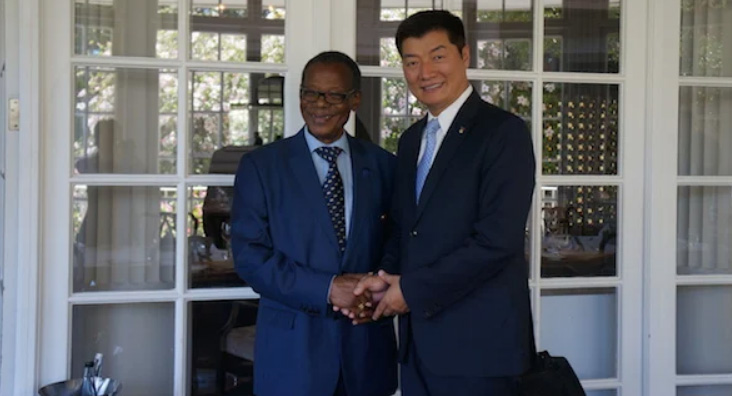 Pretoria, South Africa — Prince Mangosuthu G. Buthelezi the President and Founder of the Inkatha Freedom Party (IFP) congratulated Dr Lobsang Sangay, President of the Central Tibetan Administration (CTA) on the successful signing of the Tibetan Policy and Support Act 2020 (TPSA), in a heartfelt letter sent on January 26, 2021. The bill was passed and signed into law by the government of the United States.

The letter was sent via the office of Representative Ngodup Dorjee, Office of Tibet, South Africa, and expressed the IFP’s constant support for the CTA, as well as cherished the hope provided by the signing of the TPSA 2020, while looking forward to its enactment under the administration of US President Joe Biden.

“Just over ten years ago the Inkatha Freedom Party officially recognized the Central Tibetan Administration as the legitimate representative body of the Tibetan people,” said Prince Buthelezi in his letter. He added that the signing of the TPSA 2020 will have a significant impact on the human rights struggle all over the world, and looks forward to the implementation of the Act under the Biden Administration.

Additionally, the Prince also stated his solidarity with the non-violent approach to the human rights struggle. “We believe that the Middle Way Approach provides the answer,” he declared, and wished Dr Sangay strength for the coming year of 2021. “On a personal note, I am encouraged to see His Holiness the Dalai Lama in good health,” he concluded, saying that His teachings on resilience were much appreciated in the pandemic.

The Tibet Policy and Support Act 2020 was introduced in the United States House of Representatives and passed by both Houses on December 22, 2020. Upon being signed by the then President Donald Trump, it made it the policy of the United States of America to oppose any interference by the Chinese government in the process of selection of the next reincarnation of the Dalai Lama, in any manner. T

It recognizes the sole authority in the selection of the next Dalai Lama in the hands of the current Dalai Lama, Buddhist leaders and Tibetan people alone. The Act will effectively ensure that the selection of the 15th Dalai Lama is done in a manner consistent with Tibetan Buddhist beliefs. The Bill also acknowledges the legitimacy of Central Tibetan Administration as the Tibetan government in exile, and also seeks to introduce key provisions aimed at protecting the environment and water resources on the Tibetan Plateau.