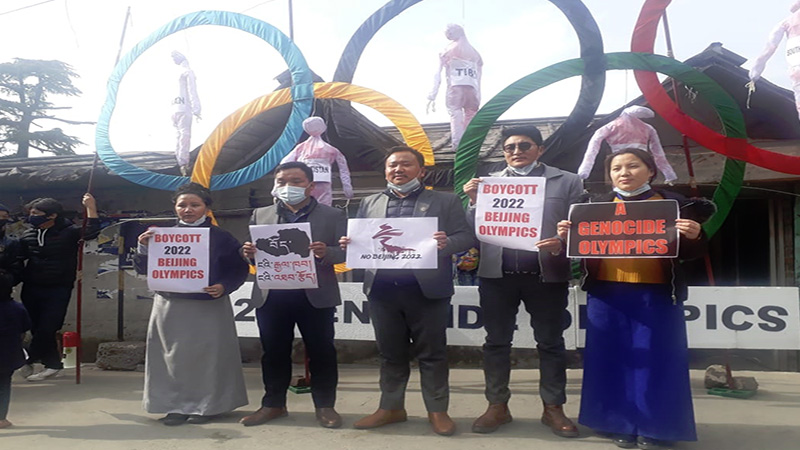 Dharamshala, India – “I want to urge the world to join our movement and boycott the upcoming Beijing Olympics,” said Gonpo Dhondup, President of the Tibetan Youth Congress (TYC) at a press conference organized by Tibetan NGOs and activists on February 3, 2021. The press conference was for the release of their official statement and to request leaders across the globe to boycott the Beijing Olympics in. It marked a one-year countdown to the Olympic games.

“I thank our friends for coming to the press conference which is jointly hosted by five Tibetan NGOs functioning in Dharamshala. I would like to tell you that more than 180 organizations have joined our campaign to protest against the decision made by the International Olympic Committee (IOC) to host the Winter Olympic Games in Beijing. Meanwhile, on behalf of everyone, I want to urge the world and eminent personalities to join our movement and boycott the upcoming Beijing Olympics and to show their support and solidarity towards us”, said Gonpo Dhondup, President of TYC.

The committee represented people from Tibet, Uyghur, Southern Mongolia, Taiwan, and Chinese Democratic groups to demonstrate their disagreement at the decision of the IOC to provide China with the honour of hosting the Olympics, even after the recent events and their history of committing heinous crimes. A country that has committed atrocious crimes and has a history of genocide, ethnic purging, and illegal occupation of different territories; getting this honour is similar to accepting them and legitimizing these wrongdoings. Their crackdowns against the idea of freedom, human rights, and democracy have led to heavy surveillance and restrictions across China and the occupied regions. The illegal occupation of Tibet has turned it into a prison where people are not free to do anything that would displease the authoritarian regime.

China’s ignorant policies ensured a crisis inside Tibet and evoked a wave of self-immolations which has been the reason for the death of more than 157 Tibetans since the year 2009. All these people wanted freedom for their people and dreamt to live in a free world. Even the recent unjust death of Tenzin Nyima, a 19-year-old monk for a silent demonstration, embodies exactly how extreme the human rights circumstance is inside Tibet.

The IOC has overlooked the predicament of Tibetans and different groups involved in China by choosing China as the host of the Olympic games. The pioneers and common freedom fighters of Tibet recently met with the IOC to request them to take a step against this but they did not censure the violations happening in China against humankind. In this manner, the obligation to consider China responsible for its inexcusable denials of basic liberties falls on activists and governments.

This has been followed by a demonstration by Tibetan Youth Association of Europe outside the headquarters of IOC in Lausanne, Switzerland. These young people have taken this step to make their voices heard as this decision puts out a question of basic humanity and ignores the struggles, torments, and brutalities faced by the Tibetans under Chinese rule.

The Chinese government under Xi Jing Ping’s leadership has intensified its suppression on the voices demanding human rights and freedom not only in Tibet but also in different occupied regions of China; between 1.8-3 million Uyghurs, and other Turkic peoples are arbitrarily detained in ‘re-education camps’, enduring inhumane treatment and political indoctrination. The vibrant community of human rights activists and outspoken youths are being crushed by the recent National Security Law in Hong Kong. The erasure of Southern Mongolian culture and language, the ongoing military intimidation and geopolitical bullying of Taiwan, and the detention, disappearance, and death of countless Chinese lawyers, feminists, democracy activists, and anyone else deemed a threat by the Chinese Communist Party is enough evidence to reconsider this decision and for the world to take a step and hold the Chinese government accountable for their actions and reactions.

“With the IOC refusing to act, after being made well aware of all the atrocities listed above, it falls on governments to take a stand and demonstrate that they have the political will to push back against China's reprehensible human rights abuses. We call on governments to boycott the Beijing 2022 Games and stand in solidarity with Tibetans, Uyghurs, Hong Kongers, Southern Mongolians, Taiwanese, and Chinese democracy activists”, stated the press release while highlighting the issues and struggles of different people under the Chinese Government. It is an urge for the leaders across the globe to stand against the policies of China and their abuse of human rights and humankind.