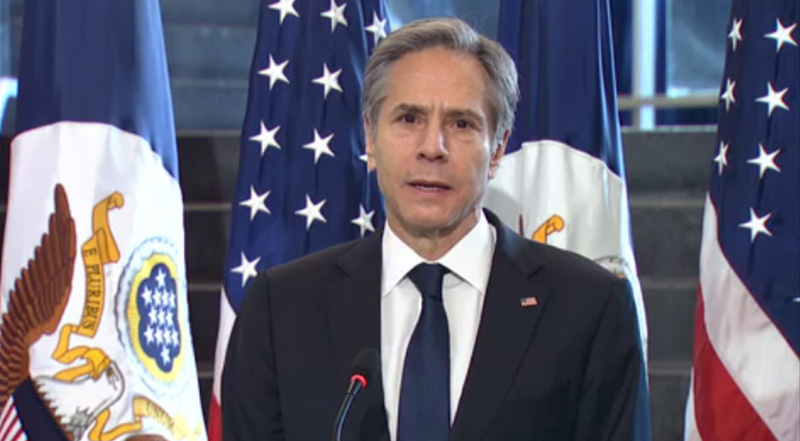 Washington, US — “US will hold China accountable for its abuses of the international system,” said Antony Blinken, US secretary of State while in an interaction between the top officials of the two powers. The leaders spoke on Friday and this was the first conversation between the top officials since President Joe Biden took office on January 20, 2021.

Blinken pressed Beijing on its treatment of Tibetans, Uighurs, Hong Kong, and the coup in Myanmar during the conversation. “The US will hold China accountable for its abuses of the international system”, said Blinken as he spoke to his Chinese counterpart Yang Jiechi and raised with him the issue of human rights violations in Xinjiang, Tibet and Hong Kong.

Secretary Blinken stressed that "the United States will continue to stand up for human rights and democratic values, including in Xinjiang, Tibet, and Hong Kong, and pressed China to join the international community in condemning the military coup in Burma (Myanmar)".

Following the call, Blinken said that he had told his counterpart that the Biden administration would stand up for democratic values while holding Beijing to account. “In my call with my counterpart in Beijing, Yang Jiechi, I made clear the US will defend our national interests, stand up for our democratic values, and hold Beijing accountable for its abuses of the international system,” mentioned the US State Secretary on Twitter of his call with senior Chinese official Yang Jeichi.

The top US diplomat reaffirmed that the United States will work together with its allies and partners in defense of their shared values and interests to hold China accountable for its efforts to threaten stability in the Indo-Pacific, including across Taiwan Strait, and its undermining of the rules based international system.

Tensions have been building up between India and China in the recent months, due to the border dispute in the Himalayan region, and the US has been trying to build a coalition with India, Japan and Australia, to take on Beijing. Blinken spoke with S Jaishankar, External Affairs Minister of India on January 29, 2021 during which the two leaders reaffirmed the growing bilateral partnership between the two countries. The relationship between the world’s two biggest economies US and China hit its lowest point in decades during Donald Trump’s presidency, and Chinese officials have expressed cautious optimism that it would improve under the administration of Joe Biden. However, Blinken’s tough tone came after his confirmation hearing, during which he promised to continue former President Donald Trump’s tough approach to China in a rare point of agreement between the two administrations.