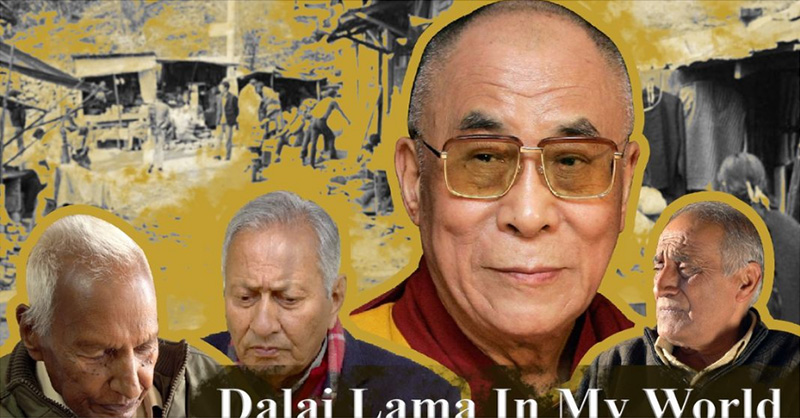 Dalai Lama in My World

Dharamshala, India — “He is to me, the greatest human being alive today in the world," Professor Paramananda Sharma said as he shared his relationship with His Holiness the Dalai Lama in a documentary produced by Tibetan TV.

In a documentary produced by Tibet TV, filmmaker Tenzin Namdo interviews three prominent citizens of Dharamshala who are close to His Holiness the Dalai Lama. The documentary, titled "Dalai Lama in My World," was part of a film grant program of Tibet TV and asked them to narrate their earliest memories of His Holiness and the impact he had on each of their lives.

The film features Ram Swaroop, former President of the India-Tibet Friendship Association, Major Vijay Singh Mankotia, former Cabinet Minister in the Government of Himachal Pradesh(HP), and Professor Parmanda Sharma, author and former member of the Library of Tibetan Works and Archives, who recount their close association with the Tibetan community and the spiritual leader through various events in their lives.

"When the Tibetans came here, they came with faith that His Holiness was here and they were with him. They had no money, nor did they have the means to earn any. All they have is complete trust in their spiritual leader," said Ram Swaroop, referring to the mass migration of Tibetan refugees to India in 1959.

He explained how Tibetan refugees began settling in India, a place they gradually started to call home. In those times, Tibetan women would knit sweaters and sell them in the market. The profits they earned would be shared amongst themselves.

"We didn't understand why they would work so hard, relentlessly every day. That's when we came to know about the situation of Tibet and we heard about His Holiness. We realized we should do something to help," added Swaroop, who at that time started to look for ways to aid the Tibetan refugees.

“So we got together and formed the Indo-Tibetan Friendship Association, where I served as president for five years. Our members are always ready to work for the betterment of the Tibetan community," he explained.

Major Vijai Singh Mankotia, Former Cabinet Minister of HP Government narrated a touching incident from when he visited His Holiness the Dalai Lama in Swarg Ashram. Mankotia was working at the Indian Military Academy in Dehradun during the 1962 operation against China, and he was frequently assigned near the northeast. Near his battalion were three government-established refugee camps. While patrolling the area, he saw the heartbreaking sight of hundreds of Tibetan refugees fleeing from Tibet to India seeking refuge. Subsequently, when he was able to get an audience with the Dalai Lama, he painted a picture of what he had witnessed.

“The spiritual leader was silent for a long time, deep in thought. After a while, His Holiness said, "When you return to the battalion, if you meet these people, tell them that you met me. Convey my blessings to them. Tell them not to lose hope. Tell them to hold on to their faith. Let them know that things will get better. I would have wanted to meet them in person, but I'm helpless this time,” narrated Major Mankotia.

When he returned to the battalion, he conveyed the message from the Dalai Lama to the people. “Everyone was moved to tears. Since I had the privilege of meeting His Holiness, people in the community have come up to me and touched me, my feet, and my clothes. They feel a new hope in the words of their spiritual leader," said the Major, tearfully recounting the incident as one of the most emotional experiences of his life. Another close associate of His Holiness, Professor Parmananda Sharma, recounted his experiences helping His Holiness the Dalai Lama translate Tibetan philosophical books and teachings. "He asked me if I knew Sanskrit, and I replied saying that I knew Sanskrit, Hindi, Persian, Urdu, and Bengali. He then asked his secretary to bring a book. That book was Bodhicharyavatara. He handed it to me and asked me to translate it into English." Professor Sharma explained that he was long involved in doing translation work in Hindi, English, Sanskrit, and Urdu for the Dalai Lama and the Library of Tibetan Works and Archives (LTWA). Professor Sharma worked in the Governing Body for LTWA for 30 years, has provided tremendous service to the Tibetan community.

In 2010, the Kashag or Tibetan government in exile celebrated 50 years of gratitude to the Indian government on behalf of the Tibetan community. An event was held at the main temple when Virbhadra Singh, the steel minister from HP, was invited to attend. Narrating the event of that day, Ram Swaroop spoke about the celebrations and His Holiness' words to his people.

"At that time, the members of the Indo-Tibetan association and residents of Dharamshala were thinking of a way to honor His Holiness back and to thank him for choosing Dharamshala. We invited His Holiness along with 4000-5000 Tibetans who were living there with him to the 'Kangra Dhaam' (a food festival of HP) as a small way to thank them. At the event, His Holiness spoke to his people and reminded them to continue to preserve and uphold the values that define the Tibetan people and their culture," said Swaroop.

After His Holiness settled in India, he suddenly became an international figure. The Dalai Lama's influence as a man of peace and one of the greatest spiritual leaders in the world came into focus. When he was awarded the Nobel Peace Prize, the world really got to know the saint and his teachings. People from all over the world began visiting Dharamshala. McLeodganj, which was once a small village, a hill station became an international destination.

Currently, Major Mankotia is making efforts to request the government of India to present the prestigious Bharat Ratna Award to His Holiness the Dalai Lama.

When he was a part of the Ministry of Travel and Tourism, Major VS Mankotia realized the importance of December 10 for the Tibetans and Himachal as His Holiness was awarded the Nobel Peace Prize on this day. He decided to make this day an international day of celebration, thus starting the International Himalayan Festival held annually in Delhi.

One year, while celebrating the International Himalayan Festival and inviting CM Virbhadra Singh, Ram Swaroop spoke to the minister and offering a suggestion." "Back in the day, the medical college in HP had around 60 seats. We proposed to reserve a seat for Tibetans to get a quality and affordable education. Although it seemed like a difficult feat, Virbada Singh agreed and reserved a seat. Today, five seats are reserved for Tibetans," He proudly explains.

Speaking about His Holiness' impact on their daily lives, they had nothing but praise. “Even in my political career, where I have represented my people and been part of the Government, I tried to do as much as I could to work with compassion and tolerance. I worked to uplift the life of the people and to ameliorate their suffering. I was heavily inspired by His Holiness and his teachings which made me achieve that. When I was in the Army, I was extremely hot-tempered but it is all gone now! My view on life has completely changed," said Major Mankotia, attributing his attitude and philosophy to the Spiritual Leader.

"He is to me, the greatest human being alive today in the world," concluded the documentary, with Professor Paramananda Sharma's powerful words.