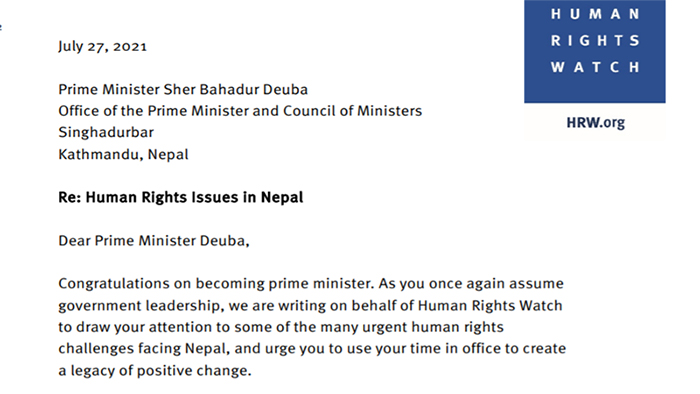 Dharamshala, India - “Over the last several years, Nepal has imposed increased restrictions on Tibetans living in the country, due to strong pressure from China. Your government should not restrict the freedom of religion or rights to peaceful assembly, expression, and association of Tibetans in Nepal,” Human Rights Watch(HRW) said in a letter to Nepal's newly elected prime minister.

Human Rights Watch sent a letter to Nepal's new Prime Minister Sher Bahadur Deuba on human rights issues that require his immediate attention." The new Prime Minister should ensure that his administration focuses on upholding the rights of citizens and strengthening the rule of law," HRW said in the letter, outlining several key human rights issues.

“The new government should take measures to safeguard and continue progressing in health and education, including providing assistance for households whose livelihoods have been devastated by the pandemic,” said Meenakshi Ganguly, South Asia Director at the Human Rights Watch.

In the letter, Human Rights Watch has urged the government to expand its ongoing Child Grant Program, which currently benefits a quarter of children under the age of five, to now include all families with children, thus helping more children stay in school.

“Longstanding and endemic impunity for serious human rights violations in Nepal is having a corrosive impact on wider principles of accountability, the integrity of institutions, and the rule of law,” said Human Rights Watch.

“In December 2020, the government used a controversial process to appoint a new national human rights commissioner, leading to allegations of politicization and undermining the independence of the commission. The same process was also used to appoint commissioners for other constitutional bodies, including the Election Commission,” stated the Human Rights Watch.

“Over the last several years, Nepal has imposed increased restrictions on Tibetans living in the country, due to strong pressure from China. Your government should accept Tibetans who flee persecution as refugees, by honoring the so-called “gentleman’s agreement” which allows their onward passage to India, and by issuing refugee cards to earlier refugees many of whom have lived in Nepal for decades. Your government should not restrict the freedom of religion or rights to peaceful assembly, expression, and association of Tibetans in Nepal,” said Human Rights Watch.

“Prime Minister Deuba faces many pressing problems, but he also has an opportunity to craft a positive legacy if his government meets the challenges head on with credible and rights-respecting initiatives,” Ganguly said.