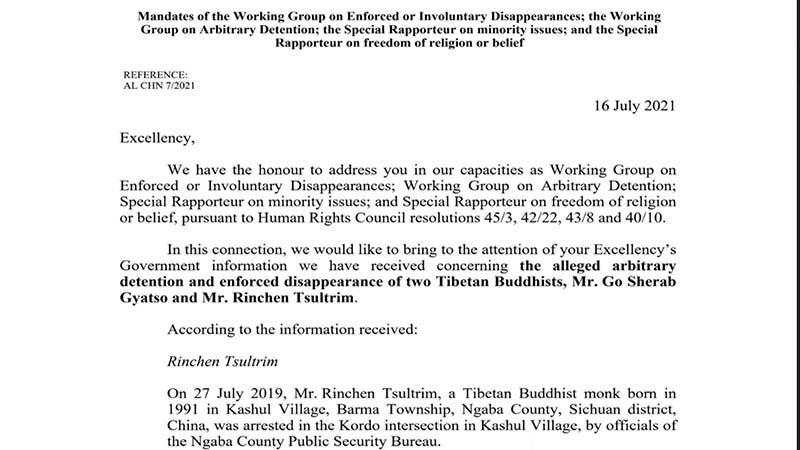 Dharamshala, India — Four UN human rights bodies have raised the cases of two detained Tibetan Buddhist monks, Go Sherab Gyatso and Rinchen Tsultrim with the Chinese government, and urged it to provide information about the detention or disappearances of the two Tibetans and their whereabouts.

On July 16, 2021, the four independent UN human rights bodies and their experts, the Working Group on Involuntary and Enforced Disappearances, the Working Group on Arbitrary Detention, the special rapporteur on minority issues, and the Special rapporteur freedom of religion or belief, sent a joint letter to the Chinese government regarding the detention or disappearance of Go Sherab Gyatso and Rinchen Tsultrim.

Tibetan prominent writer and teacher, Go Sherab Gyatso was detained in Chengdu city, Sichuan Province by the Chinese authorities on October 26, 2020. The Chinese authority warned his family members not to tell anyone about his arrest and other information. Therefore, further details including reasons for his arrest, detention, and his current whereabouts are still unknown to the world. Go Sherab Gyatso (Gosher) hails from Ngaba county, Amdo region of Tibet, and was a monk of Kirti monastery.

Rinchen Tsultrim was arrested with two other monks on the night of August 1, 2019, in the occupied territories of eastern Tibet, has been sentenced to four and a half years in prison in March 2021 by an Intermediate People's Court in Chengdu, Sichuan province. The 29-year-old monk from Kashul village in Ngaba County (Ch: Aba Prefecture, Sichuan Province), eastern Tibet.

“We express serious concern for the alleged arbitrary detention and enforced disappearance of Mr Go Sherab Gyatso and Mr Rinchen Tsultrim, members of the Tibetan Buddhist minority. We are particularly concerned at information indicating that these detentions are not isolated events, but reflect a worrying pattern of arbitrary and incommunicado detentions, closed trials, and unknown charges and verdicts against the Tibetan religious minority in China, some of them amounting to enforced disappearances. We are also concerned that individuals have been targeted based on their religion or ethnicity,” the UN human rights bodies said.

They also requested the Chinese Government to provide information on the measures taken by the relevant authorities to investigate the alleged enforced disappearance of Mr. Go Sherab Gyatso and Mr. Rinchen Tsultrim and to ensure the protection of their human rights, in particular their rights to life, liberty, personal security, and personal integrity.

The experts further requested information on the measures taken by the Government of China to ensure the protection and promotion of the human rights of ethnic, religious, and linguistic minorities, such as Tibetan Buddhists.