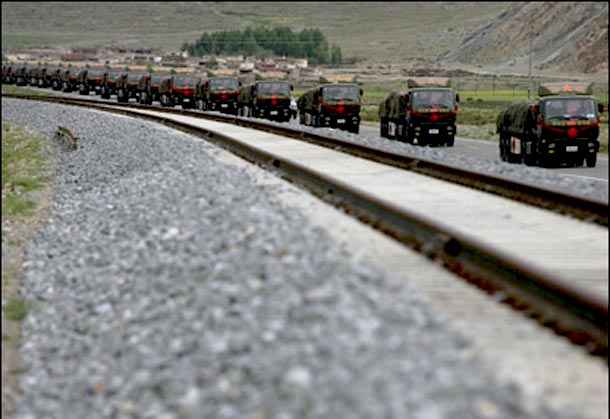 Dharamshala: Tibet is in a state of unrest after thousands of Han Chinese migrants, including workers, investors, merchants, teachers and soldiers, have poured into a remote part of the country. According to The New York Post, Chinese leaders see development, along with an enhanced security presence, as the key to pacifying the Buddhist dominant region.

Beijing invested three billion dollars in the Tibet Autonomous Region in 2009, a 31 percent increase over 2008. Tibet's gross domestic product is growing at a 12 percent annual rate, faster than China's average. Although the influx of money and people has ushered new prosperity, it has also deepened resentment among many Tibetans.

Many world experts say that economic development in urban Tibet is very much a reality, however, it poses the question: for whose sake has this development taken place and on whose terms?

According to a 1990s census, outside of the traditional Tibetan "Bharkor" market there are around 3,500 to 4,000 shops and restaurants in Lhasa, but Tibetans own only 400-450 of them, leaving the remaining 85% under non-Tibetan (usually Han Chinese) ownership. As a result, Tibetans have been economically marginalized and deprived of their own fair share.Chinese officials have claimed "Tibetans make up more than 95 percent of the region's 2.9 million people," but refuse to give estimates on Han migrants, who are not registered residents.

As stated earlier, one of the primary targets of subsidies is urbanization. Like other towns, the city of Lhasa has expanded and the population has increased from 30,000 in 1950s to 200,000 in 1998. Though these figures seem impressive, it is again necessary to look at the finer details of the statistics to understand who, in fact, is benefiting from this urbanization. It is estimated that as much as 60-70% of the population in Lhasa is now Chinese. Not only do they dominate private businesses, but they also occupy most government-related employment. "Approximately 95 percent of official Chinese immigrants are employed" in state- owned enterprises.