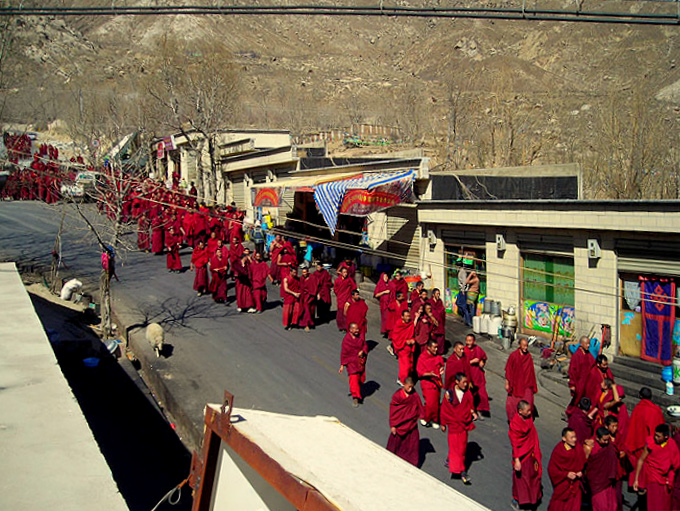 Dharamshala: The 'Lhasa Intermediate People's Court' sentenced two monks from Drepung monastery to heavy prison terms in June for their activities in the March 2008 uprising, according to a report by the Tibetan Centre for Human Rights and Democracy (TCHRD).

Jampel Wangchuk and Kunchok Nyima were arrested on 11 April 2008, and in June this year were sentenced to life imprisonment and 20 years, respectively. There whearabouts remains unknown.

On 10 March 2008, around 350 monks from Drepung monastery began a protest and headed towards Lhasa City. Police halted them and contained them with barricades, after which they staged a hunger strike. Some of the monks were detained. Others were sent back to the monastery or deported to their areas of origin, including Sichuan and Qinghai provinces.

51-year-old Jampel Wangchuk (lay name Tsephel) originates from Tsotoed township, Phenpo Lhundup county. He became a monk in 1982 and mastered in scriptures. At the time of his arrest, he was the disciplinarian of the monastery. Kunchok Nyima (41) belongs to Zari Township, Dzoge County, Qinghai.

Around 40 monks from Drepung monastery have been sentenced to prison. One, Gyalpo, died in jail in August 2009 as a result of torture. The whereabouts of Ngawang Chonyi, Ngawang Sertho and a cook nicknamed as Gyakpa (Fatso) is still unknown.

Drepung Monastery remains under the vigilance of the Chinese authorities. A 60-member work team from the 'Tibet Autonomous Region' government ('TAR'), the 'TAR' National People's Congress and the People's Political Consultative Conference, give daily 'political and legal classes' to the monks. A team of People's Armed Police (PAP) is also stationed at the monastery, under the pretext of maintaining fire safety.