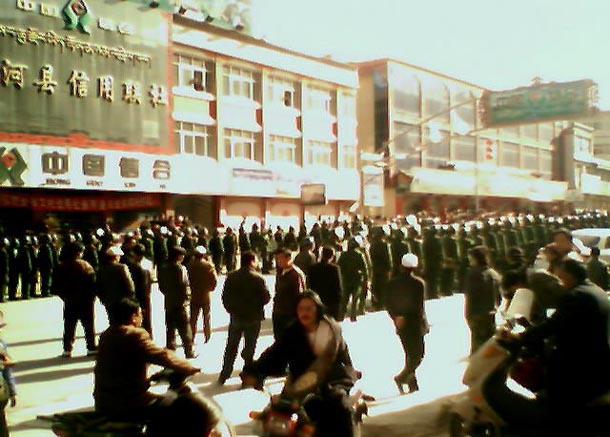 Dharamshala: - A Buddhist monk died after setting himself on fire at a market near Kirti monastery in Amdho Ngaba county, eastern region of Tibet, a Tibetan who live in exile said on Wednesday, in what could be the latest example of a protest to against Chinese rule in the region following the 52nd anniversary of Tibetan national uprising day.

According to the source, the incident of self-immolation of a Buddhist monk sparked a wave of latest protest in the region which later crack-down by the Chinese military forces and police. Phuntsok, 21, of Kirti monastery carried out protest at 4PM before immolating himself, died after monks and local public took him to the monastery, Kanyak Tsering told The Tibet Post International.

"Over 1000 Tibetans including monks immediately gathered to protest against the Chinese rule and the protest walked nearly a mile from the market where self-immolation happened, however, heavy Chinese military forces and police immediately arrived at the protest zone, brutally beaten in the crackdown and dispersed the demonstration," he added.

Tsering said that all of the protesters were arrested, and several of them sustained injuries from electric baton and iron rods used by the armed Chinese military forces.and police after the crowds chanting various slogans against the communist rule.

"A crowd of Tibetans later grew in numbers and took Phuntsok to his monastery and managed to protect when the police were trying to take him away. The monks from the monastery made it clear that they will not let the Chinese police take away Phuntsok's body until they all die," he further said.

In the meantime the situation has once again become tense as a large amount armed military forces surrounded the Tibetan monastery, beatings and arbitrary arrests continue elsewhere.

The presence of military troops were increased recently in major towns and cities in Tibet particularly in in the Tibetan capital Lhasa and its surrounding areas, people in Tibet fear arrest and imprisonment for speaking about their basic human rights.