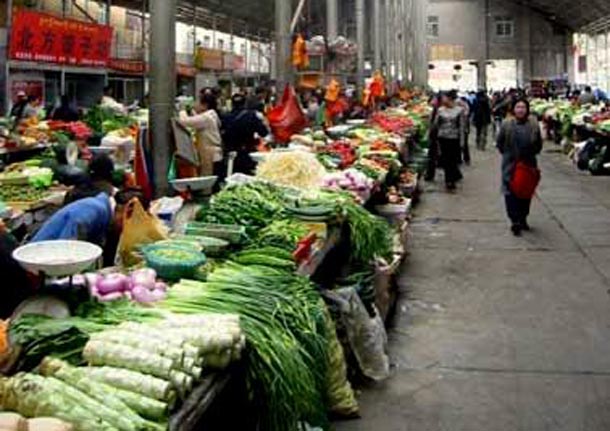 Dharamshala: - Vegetables in Nangchen county, eastern Tibet, are a vital, staple food. Tibetans in the area have lived harmoniously for years, producing, eating and trading a wealth of fresh vegetable products. Shortly before Chinese New Year however, Tibetans in the town of Kham; not far from Kyigudho (Jyekundo) in Nangchen County, began boycotting Chinese vegetable stores and businessmen, as a response to the ridiculously high prices for food.

The Tibet sources told The Tibet Post International that the current the price of vegetables in Nangchen has been soaring, and rose to extremely high levels recently, particularly when compared to other Tibetan Counties. For example, whereas the regular price for 1 Kilo of apples should be 2 Yuan, it has currently been priced by Chinese Vegetable sellers at a massive 8 Yuan (around 1.22 US Dollars) per Kilo.

The price, being marked four-fold has devastating consequences; it squeezes the poor in the community, and leaves less money for food or daily costs for the Tibetan people.

At first, Tibetans from a community organization in Nangchen went to speak directly to the Chinese vegetable sellers, to resolve the issue. The Chinese however refused to lower their steep prices. The prices of their foods began to rise especially high around New Years, which was in Early February, putting an enormous strain on the marginalised Tibetan community.

After their meeting with the Chinese businessmen, the concerned Tibetans went to speak to the local police, who did not aid the them either.

The community organization then held a meeting which was attended by
many Tibetan men and woman from the local community. After a long, difficult discussion, a decision was made to completely boycott the Chinese vegetable stores.

This style of peaceful protest the Tibetans employed is similar to that used by Mahatma Gandhi, during the Indian Independence movement.

One Tibetan said, "We were inspired by the effective use of boycotts in other struggles, especially from the Indian independence movement."

After the decision was made, the organization spoke with Tibetan businessmen in Nangchen who agreed to travel to Xining to purchase vegetables and sell them at an affordable rate.

Currently, the majority of Tibetans in Nangchen are participating in the peaceful boycott, working together to get their message heard.

Chinese businessmen, who are currently described as "bored in their stores with no business," went to the local police, but were also told that it was "not their problem."