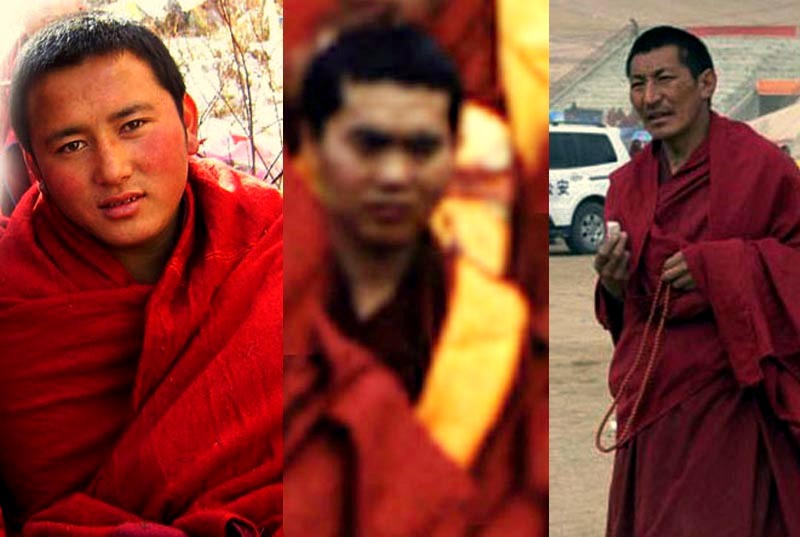 Dharamshala: - Since the self-immolation of Phuntsok on 16 March 2011 at Ngaba County, Sichuan, coinciding with third anniversary of the 2008 uprising in Tibet and to protest against continued repression by Chinese authorities in Tibet, the situation has aggravated at Ngaba Kirti Monastery - the monastery to which Phuntsok was affiliated.

According to latest confirmed information, Chinese security forces have cordoned the monastery and additional contingents of armed security forces (estimated to be around 800) have been brought in on 9 April 2011 to reinforce security clampdown in Ngaba County. The movement of the monks is totally restricted with no one being allowed to go in or come out of the monastery. Gaps in boundary barb wire in north of the monastery have been closed with concrete walls. Since the cordon, monks are facing shortage of food and depend on voluntary food offerings by locals through the monastery administration. Authorities have prohibited the faithful local Tibetans from offering food to monks. Reports from ground indicate that if the situation remains same, over 2500 monks in the monastery will face starvation which will most probably lead to a mass revolt. In such an event security forces will unleash its deadly assault leading to extrajudicial killings as it happened three years ago on 16 March 2008 in Ngaba County. The lamas and monastery officials have been able to maintain peace so far by advising the monks to remain calm despite the ongoing repression.

In the aftermath of Phuntsok's protest and subsequent show of solidarity by monks of Kirti Monastery, the authorities have taken drastic measures to bring the monks under control. According to latest information, since the begining of April 2011, security forces who were earlier surrounding the monastery have entered into the campus. They have stopped elderly monks from even walking the outer circumambulation path (Kora), and made observation posts (with binoculars) on stepped platforms of stupas in the monastery. The guards keep round the clock vigilance of activities in the monastery. Over 33 people have been arrested out of which 22 people (8 monks and 16 lay people) continue to be under detention.

The Tibetan Centre for Human Rights and Democracy (TCHRD) appeals to the international community and the United Nations mandates on human rights to urgently issue their intervention in order to stop the ongoing security clamp down and arbitrary arrests and detentions of Tibetans and the overall deplorable human rights situation in Ngaba County. The Centre urges the authorities to immediately stop the gross human rights violation of denying food to monks of Kirti Monastery and to ease restrictions on movement.

* Three monks from the Kirti Monastery, Dhonyoe Dorjee, Tenzin Jamko and an unidentified monk have been arrested on 8 April 2011.

* On 8 April, around 30 people staged a protest in front of the Public Security Bureau Office at Warma Township in Dzamthang County. One Tibetan (a young man from Gyalrong County married into a family in Dzamthang County) was critically injured in the police offensive and later died in a hospital. Around a thousand Tibetan staged protest over the death.

* Two monks, Lobsang Ngodup, 32, and Lobsang Choephel, 24, were detained around 30 March and continue to be under detention. Reasons and whereabouts remain unknown.

* The Tibetans in neighbouring Namda Township in Dzamtang County in Ngaba staged a protest on 23 March to show solidarity with the Tibetans in Ngaba County. The authorities responded by sending large number of troops to block movement in Dzamthang and Ngaba Counties. At least four Tibetans, Wolkho, Dorjee, A-Dor and Woeser Dorjee, were arrested and continue to be under detention.

* Lobsang Tsepak, 27 years old, was detained in the night by police in Beijing on 25 March. He is a student at the Central Nationalities University. He was earlier affiliated to Kirti Monastery, the same monastery to which Phuntsok belonged.

* Around 20 March, Lobsang Tenzin was arrested and continue to be under detention.

* Around 20 March, the authorities called a public meeting in upper Thawa and Gabma Villages of Ngaba County, imposing fines of 30 Yuan on absentees. Lately the Village Committees in Ngaba County have been calling public meetings "to praise and be grateful" to the Communist Party. Moreover, the officials have been visiting each and every household in Ngaba County enquiring about monks in the family and to learn their opinion on the self-immolation of Phuntsok.

* Beginning from 20 March, the authorities have intensively conducted the so-called "Love your country, love your religion" political campaign in the monastery for five days. Upon conclusion of the campaign, the officials have formed sub groups to visit each and every room in the monastery to "solicit feedback" and "gather opinion".

* Since 19 March, regular religious programs in the monastery have been suspended by the authorities and armed soldiers with police dogs prowl around the monastery by night. The monks are prohibited from staying late at night from studying their scriptures. Monks found outside their room are beaten by the officials.

* The students of Ngaba Prefecture's Upper Middle School located in Barkham County began a hunger strike on 17 March to show solidarity with Phuntsok and as a protest against the authorities' inhuman treatment to him and the pursuant Tibetan protest. The strike is known to have lasted until 23 March, thereafter information could not be ascertained.

* Phuntsok, a native of Meruma Township, Ngaba County, was arrested on 16 March and continue to remain under detention.

A young Tibetan monk, Phuntsok, self-immolated in Ngaba County, Sichuan, on 16 March 2011 and died in a hospital early next morning. His act was timed to coincide with the third anniversary of spring 2008 uprising in Tibet to protest against the Chinese rule in Tibet.

When Phuntsok was on fire the police doused the flame and began beating him severely. Local Tibetan bystanders rushed to the scene to protect the monk and took him to his monastery - Kirti Monastery. When he was later taken to a hospital, the authorities demanded police clearance for treatment. The monk succumbed to burn injuries the next day around 3 am (local time) on 17 March.

Around a thousand Tibetans gathered in the market and staged a protest against police and the authorities. The People's Armed Police and officers from other security agencies brutally broke the peaceful rally. Several Tibetans were detained from the crowd.