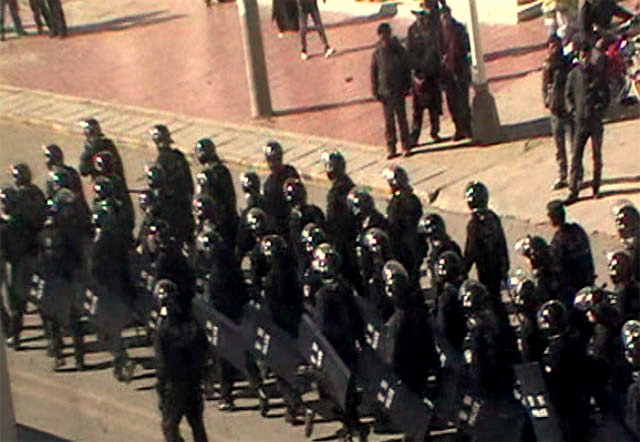 Dharamshala: - The current situation still remains tense in Ngaba region of eastern Tibet as the Chinese authorities continue to arrest Tibetan monks. Thousands of armed Chinese police and paramilitary forces were deployed and foreign reporters have been banned from entering Tibet since the protests following Phuntsok's self-immolation which coincident with the 3rd anniversary of violent protests against Chinese rule in Tibet.

On May 12, Kirti monk Losang Choepel, age 19, of the Karma Tsang house in the Naktsangma pastoral division of Cha township, Ngaba region of Tibet, was arrested from the monastery and taken into detention. His place of detention and the reason for his arrest are not known. The authorities stopped people from speaking out about or reporting on politically sensitive issues by accusing them of divulging "state secrets", "splittism" slander, and the crime of "subversion".

Ven. Lbosang Yeshe and Kanyag Tsering, both media coordinators from the Dharamshala based Kirti Monastery, told The Tibet Post International that "the main question the foreign press are asking is how many soldiers are there in Ngaba region of eastern Tibet. So far we have just been giving the numbers estimated by local witnesses, no hard figures."

"But, recently one correspondent reported hearing from a Chinese soldier at the new army base that there are 55,000 troops deployed in Ngaba. This is the first estimate we have heard from the Chinese side. Of course we don't know how reliable it is, but it gives some idea of the crackdown going on all over Ngaba county", they said in their latest statement to report the Ngaba region's current tense situation.

"These days, soldiers, police and special police forces, inside and out, armed with a variety of weapons, are maintaining their blockade of Kirti monastery," they said. They divide monks from the same dormitory into groups of 20, and hold so-called ‘Patriotic Religion' reeducation meetings in the monks' dormitory buildings. They ask lots of questions, and when the monks cannot give the answers that the officials want to hear on many issues, it seems that they are arresting them.

However, there are no details of individual cases available, as the channels through which they could be sent are under tight control. Kirti monk Lobsang Dargye of Ngaba Tsang house in Ruchen no.2 of Me'uruma township was sentenced to 3 years in prison around May 2. "The crime for which he was sentenced was to haven spoken his own mind in front of the officials and soldiers during the Patriotic Religion meetings. That shows how much freedom of expression Tibetans have."

Since March 16th this year, they have been changing the heads of all the townships (Xiang) with people from other counties. The exiled Tibetans and their supporters across the world continue to lobby for a peaceful solution of the current tragedy there and they keep criticising that US, EU and UN are not doing enough to pressure Chinese authorities to stop human rights violations in Tibet.