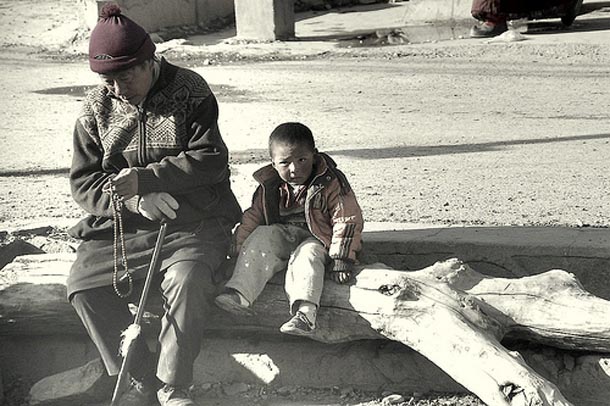 Dharamshala-Tensions are growing between local Tibetans and Chinese migrants as Beijing attempts to relocate and reconstruct the town of Kyigudo, Yushu county in eastern Tibet (Ch: Qinghai Province).

An earthquake struck the region around one year ago, and 3000 lives were lost in Qunighai. Now, on the anniversary of the event, the local Tibetan community are facing ever growing hardships. The residents of the main town, Kyigudo - which has a population of 80,000 - have been moved out. The Tibetan community are being forced to leave one neighborhood at a time, as the town itself will be rebuilt as a tourist centre connected to the rest of China by a new infrastructure.

The earthquake hit an area that was largely untouched by China; a Tibetan community that was often left isolated and uninfluenced from Beijing. However, after the disaster, Chinese authorities swarmed the Kyigudo with Han migrants.

"During the first three months there was an influx of Han Chinese workers and engineers - to do the work. But they had to wait for the master plan. The Tibetans wondered what they were all doing here, causing considerable tension", says a young Tibetan official nicknamed Tuhuor.

Reconstruction in the early spring of this year was hampered by a sit-in of several thousand Tibetans. For three days they put up banners pleading for fair treatment.

"The disaster has become an opportunity for the government to take over land. Officials turn up with the special police and threaten people" says the Tibetan writer Tsering Woeser. Around 30 demonstrators have been arrested due to the growing tension.

During the rescue operations in April 2010, Chinese television focused exclusively on the efforts of the Chinese military, and paid little attention to the monks, who turned up in large numbers to clear the wreckage and search for survivors. Chinese authorities now intend to make Yushu connected to the region by road and rail to Xining- a large city at the eastern extremity of the province, and also to other Kham areas in eastern Tibet (Ch: Sichuan, Tibet and Yunnan). The head of the town's reconstruction bureau stated:

"In three years we will do what would have taken 20 years to achieve."

The authorities are also planning to change the name of the town to 'Sanjiangyuan', after the nearby nature reserve that contains the headwaters of the Yellow River (Huang-he), the Yangtze and the Mekong. The Tibetan name will be lost.