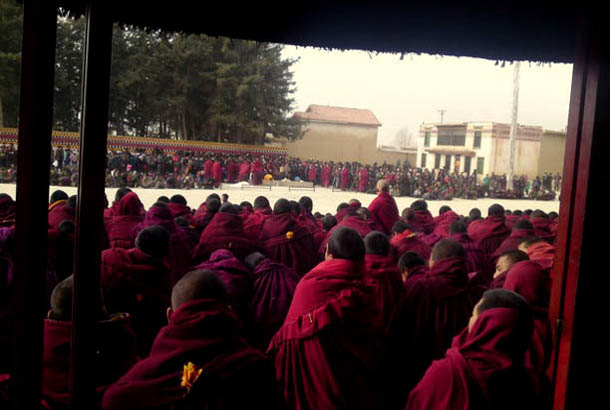 Dharamshala- Oppression continues for the monks of Kirti Monastery - Tibet, who were deceived by Chinese Officials on their monthly income, and a 're-education programme' that threatens their culture and beliefs.

Fourteen monks from Kirti didn't accept the money-they said that 'the money comes from the sweat and blood of other people'.

The monks who flatly refused the money were confronted. Chinese officials  highlighted to them that 'you should take this money' and they gave advice on how the monks should use it.

The fourteen monks who didn't accept the money were not alone in their strong moral behavior against the Chinese officials. Many other monks took the money and  tore it apart defiantly. An argument broke out between the Chinese officers and the Monks, who were furious.

The monks said that under Chinese rule they would not accept money from the Government.  The Chinese officials said to the congregation from Kitri that they should take it - that its from the people . The peaceful monks bravely retorted:

We follow  the punishment of law if  not accepting money  is a crime to the Chinese Communist Constitution - we wont accept your money'. For two months almost 2000 monks in Kirti Monastery were controlled by Chinese Police - the issue is ongoing and has been captured in the international spotlight for weeks.

The latest issue faced by the suppressed monks in Kirti is that the Monks has doubts that the Chinese government are even aware of what has been happening in the Monastery: that they were isolated from the outside world. The clan of monks wanted desperately to tell the Chinese Government about the Kirti situation, which has witnessed an enormous crackdown.

In Kirti monastery, the Chinese who have the site under siege, continue to give 're-education programmes'.  Each morning, the Chinese officials gives speeches, and in the afternoon, all of the monks give their answers. If the monks do not write what the Chinese want, then they are punished by Chinese police.

The monks of Kirti Monastery sadly continue to face much oppression, and the issues faced by the monastery at the hands of Chinese officials, which began when Phusntok the monk self immolated on March 19th, 2011, still continue to this day.

Reporters: Lobsang Yeshe, and Kanyag Tsering on may 31st 2011