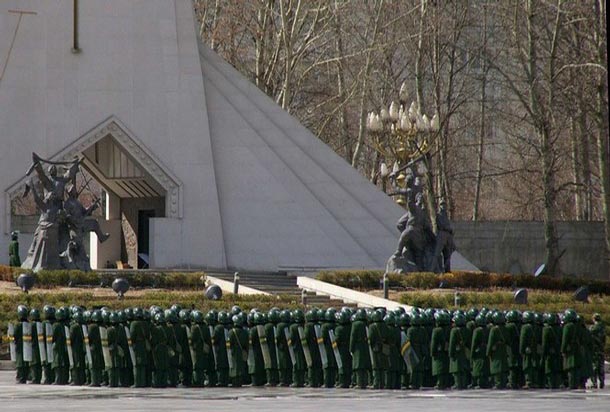 The identity of the two peacefully protesting nuns, are Jamtuk Dolma of Lhopa Township, and Dolma Palmo aged 20 from Lhopa Township in Karze County.

According to sources form the Central Tibetan Administration, the two nuns were arrested by Chinese police after a severe beating. The current location of the two nuns however is currently unknown. Both the Lay and Monastic communities have witnessed a step-up in restrictions by the Chinese authorities in the region. Monks and nuns in Karze are no longer allowed to go out to the town without prior permission from the Chinese authorities.

On the 18th of June, the Chinese authorities raided some of the monastic communities in Karze. During the raid, they registered the mobile numbers and telephone numbers of many of the monks and nuns. The situation in Karze remains highly tense. On the 6th and 7th of June, three monks were beaten and detained for protesting against Chinese rule. The 17th of June witnessed two monks of Khangar monastery, Rinchen Gyatso and Lama Tsering, being detained and forcibly taken away by the police after raising slogans. They stated: "Long live His Holiness the Dalai Lama," "Tibet is an independent nation."

Seventeen more Tibetans, monks and nuns from different monasteries have also protested in Karze lately, and were soon detained by Chinese authorities. Among those included were four nuns from the Lamdrak nunnery, three monks of Beri monastery, one monk from Khangar monastery, three nuns from Getse nunnery, and six monks from Karze monastery. According to news sources, attempts to reach the Karze area authorities for comment on Monday were unsuccessful.

The Tibet Post International has been informed by Tsultrim; a monk from Depung monastery in South India that ‘on the 14th of May this year, Chinese authorities arrested a 37 year old Tibetan woman from her house in Dhadho Karze County Eastern Tibet. The local police accused her of being related to helping a Tibetan Buddhist nun on the 12th/13th of May of this year. Disputing documents, stating ‘Go back China' ‘Invite His Holiness the Dalai Lama', ‘China and Tibet are separate nations' and similar articles.

According to Tsultrim, she was detained in Karze, however, the authorities are not allowing anyone to meet her, including her own family. Therefore, nobody knows where she is detained, and of her current condition.

The arrested subject is a business-woman. She has computers, a printer, DVDs and many documents in her home. Some of them were destroyed by the Chinese authorities, some were taken.

(Tsultrim): "Those documents were not that important-however, the Chinese have destroyed them, and her house is full of broken things now, a man from this area has told me"

"She has a mother (70) and two children (12 and 7). The local people only know the accusations against her; they do not know the reality of the situation. It is difficult, her mother is very old and her children are very young".

In further news of human rights breaches in Tibet, Chunyi Lhamo; a nun from Gaden Choeling Nunnery, held a peaceful protest in the main market of Karze County at 8am (Beijing ST) on 20th June.

The brave nun had a hand drawn Tibetan national flag, and shouted: "We want Freedom in Tibet ", [there is] "No Freedom in Tibet. Long live of His Holiness the Dalai Lama."

She also distributed pamphlets calling for freedom in Tibet. In response, she was immediately arrested by Chinese police. There is sadly no further information regarding her whereabouts.

In a response from the Tibetan community in exile, the TWA stated that:

"TWA is concerned by the actions of the Chinese authorities and appeals to the international community and the United Nations to urgently issue intervention to stop the ongoing security clampdown, arbitrary arrests and detentions of Tibetans in Karze County of the Tibetan Autonomous Region. TWA calls on the Chinese authorities to lift the restrictions of movement and immediately release political prisoners that have been detained for arbitrary reasons".