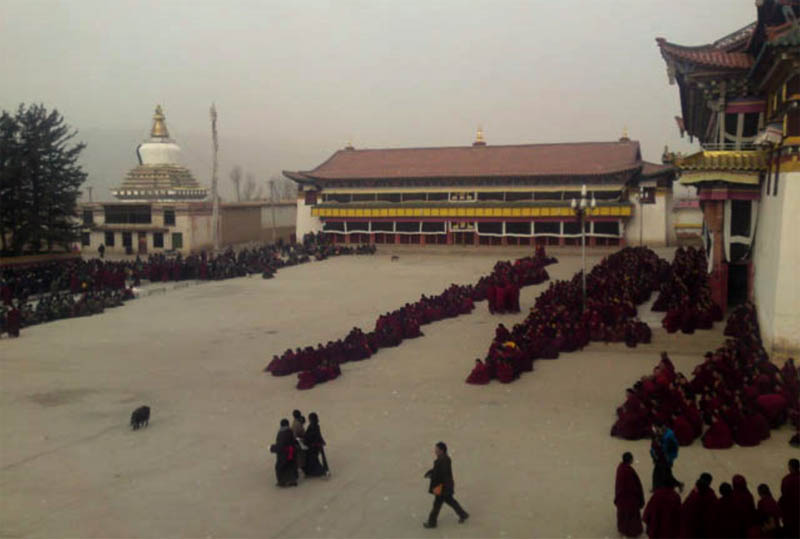 Dharamshala- Chinese officials have declared over 1200 members of Tibet's Kirti Monastery to be expelled. In a huge breach of international human rights, Chinese officials are forcibly controlling the sacred Buddhist institution of over 5000 monks.

In the latest in a series of darkening reports from the region, information has been released that on the 6th of May this year, a group of authorities from religious department of the ‘United Front Work Department' (a branch of the Chinese Communist Party), Ngaba, came to Kirti Monastery to make an announcement.

According to sources from the monastery, in a specially prepared register, listing around 1200-1300 monks, that those on the list are to be expelled from Kirti monastery, as of that day (6th May 2011). The list consists of Tibetan monks who live at, and attend the monastery.

The Chinese authorities also announced several monks' names on the list, which they posted on the walls of the monastery, stating: ‘you have to leave the monastery [immediately]'.

The rooms of those listed will be taken by the government, sources from the region state.

In a peaceful response to the Chinese authorities, the Tibetan monks denied the Chinese announcement, highlighting that the monastery is their home.

Sources informed the Tibetan Administration official media that the Chinese authorities told the monks: ‘it's better to leave before we ask the police to come', adding:

‘Once the police arrive here, there is only one way to go - prison'.

The current situation at the monastery is highly tense. The monks are facing both a physical and a psychological battle on a daily basis since March.

As a result of peacefully protesting against the Chinese regime, news has emerged of one local in the region; Gyatso, being recently arrested. The 63 year old from Ngaba County was taken on the 27th of April, in response to standing up to the Chinese authorities. His arrest came after he was one of the Tibetans who were showing solidarity against the Chinese crackdown on the monastery.

Between the 12th to the 22nd of April this year, the Tibetans in the region from local villages, gathered at Kirti monastery to support the monks. When the Chinese authorities asked them to ‘go home', Gyatso replied:

"if you [the Chinese] promise us you will not arrest the monks, I promise you all of these villagers will go back home".

No information has surfaced or been released on Gyatso's whereabouts.

The enormous crackdown at Kirti Monastery began when Phuntsok, a resident monk, self immolated in protest of China's occupation of Tibet, on March the 16th 2011. Since then, an huge military crackdown was conducted on Kirti. It consisted of over 300 monks being forcibly taken from the monastery without consent, to be ‘re-educated' by Chinese officials.

An international outcry has been raised over the three months of crackdowns in the region for the repeated and growing human rights breaches.

Regarding the disappearance of 300 monks from Kirti, the United Nations Working Group on Enforced or Involuntary Disappearances stated on June the 8th that Beijing needed:

"To disclose the fate and whereabouts of all those who have been subject to enforced disappearances in China, including a group of Tibetan monks whose fate or whereabouts still remain unknown."

In a recent statement, the International campaign for Tibet added:

"the presence of troops blockading the monastery, the risks of disappearance, torture, and detention due to the security crackdown combined with a patriotic education campaign that is making religious practice difficult or impossible [for the residents]."

Many deem Kirti as one of the most important and influential Tibetan institutions in the region, and a symbol of Tibetan culture. The human rights abuses at Kirti have dogged Chinese Premier Wen Jiabo upon his current visit to Europe.