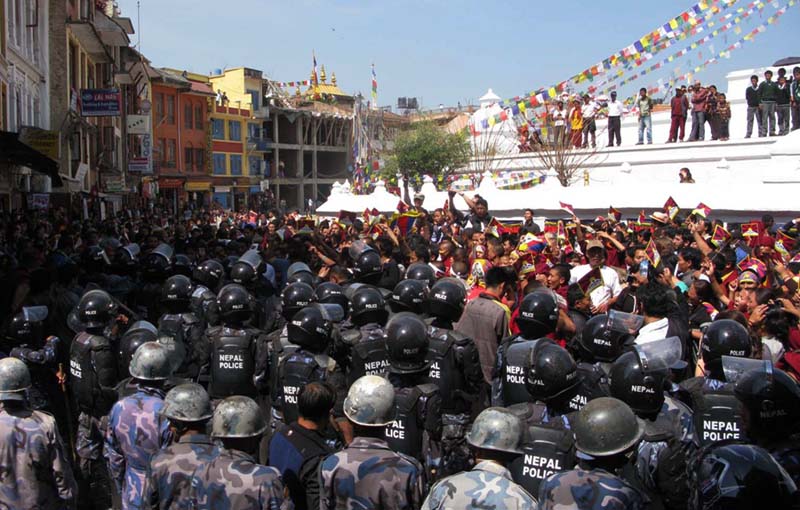 Dharamshala: On July 12, Nepal arrested six Tibetan men, aged 16 to 27, for illegally crossing its borders from Tibet. According to AFP, local police apprehended them before dawn in a village in Lamabager, Dolakha district. Deputy Superintendent of the area Umesh Raj Joshi said that they would be handed over to the Immigration Department in Kathmandu shortly.

Having crossed the Himalayan border area on foot, the escapees are now held in custody at the District Police Office in Charikot, with their files already transferred to immigration authorities.

US embassy cables, exposed by WikiLeaks last year, suggest that Chinese authorities are paying Nepalese police to detain Tibetans, but the police declines to reveal exact numbers of Tibetans arrested in Nepal.

An estimated 2500 Tibetans flee from China into Nepal every year though this is the first confirmed case in a year. Home to around 20.000 Tibetan refugees, thousands more are believed to live there as undocumented migrants.

In March this year a Chinese army delegation pledged $20 million in support of Nepal's defence budget while meeting with Nepalese border officials. Recently, on July 10, meetings were resumed when the Beijing Intelligence Bureau and Lhasa Security Bureau held talks with Nepal border authorities.

Underlining the heightened border-security, local newspaper The Kantipur Daily reported on July 12, that China intents to ban foreigners from entering via the Nepalese border. A month-long prohibition is set to take effect from July 25, the same week that China's Vice President Xi Jingping is scheduled to visit Tibet.

"The Chinese side has never sounded as serious regarding border security", the Kantipur daily quoted Bijay Poudel, the Nepali head of immigration at the Tatopani border crossing, as saying. The move will affect about 400 tourists who enter Tibet via Nepal every day.

Nepal has continuously been stepping up border security since the 2008 riots in Tibet and the restrictions facing Tibetans in Nepal are growing. The newly appointed Chinese Ambassador to Nepal, Yang Houlan, has recently been holding talks with politicians, asking them to prevent any anti-China activity in Nepal.

Photographs of Tibetan religious leaders, the Tibetan anthem and flag as well as banners with pro-Tibet slogans have all been banned, while Tibetan celebrations of Buddhist holidays etc. have been kept under strict control.

On the recent birthdays, this month, of His Holiness the 14th Dalai Lama and the 17th Gyalwa Karmapa, festive activities were clamped down on and in the lead-up, 39 Tibetans have been arrested in Kathmandu in a strategy aimed to prevent public celebrations of the Tibetan spiritual leaders.

On July 10, 12 of these detainees were, however, ordered to be released by the Supreme Court of Nepal who found that their 20 days in detention was "without reasonable explanation... and that said detention is illegal," according to court documents obtained by the International Campaign for Tibet.

News site TibetCustom.com reported Mary Beth Markey, President of the International Campaign for Tibet, as saying that, "The Nepal Supreme Court's ruling clearly points to the political nature of these detentions, highlighting the precarious situation Tibetans face in Nepal", adding that, "This is an encouraging indication of the independence of the judicial system in Nepal despite Beijing's pressure on Nepal to crackdown on activities it deems to be 'anti-China'."