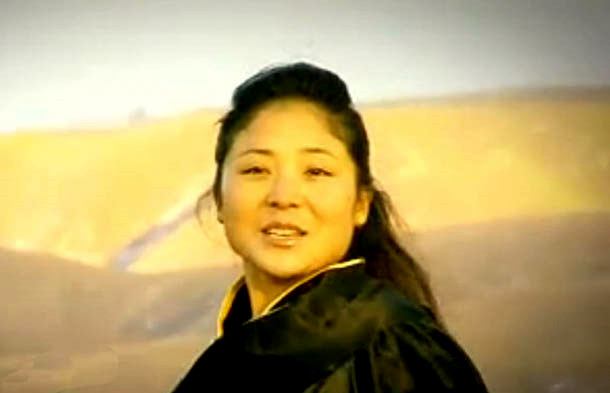 Dharamshala: - A well-known and a young Tibetan female singer, Hortsang Lhalung Tso was detained by Chinese authorities of the so called Public Security Bureau (PSB) in Tsoe-town of Sangchu county. Hortsang Lhalung from Sangchu county, Amdho region of eastern Tibet was detained on the same day as an outspoken Buddhist monk, Jigme 'Guri' was arrested for fourth time by the authorities.

Phuntsok, a Buddhist monk from Drepung monastery based in South India told The Tibet Post International that she was detained by the Chinese authorities just before attending a Tibetan culture show with other popular Tibetans as well as singers and musicians who were invited to perform the show. "She could not perform her song, because she was detained before the show," said Phuntsok.

"Lhalung was invited to a culture show held on Saturday, 20th August, in a public hall called 'Gangri Lhugar-ling' in Tsoe-town of Sangchu county. Most of the interested Tibetan musicians and singers were invited by the show organizer to a culture festival. She was supposed to perform the Night Concert Opening Song," he added.

"She never had any political activity to cause them to arrest her," he further added. According to Tibet sources, No warrants have been shown by the Chinese authorities for either arrest, amily members currently seek the reasons for her arrest and they are also not informed where she is currently being detained.

Lhalung from Sangchu county, Amdho region of eastern Tibet is currently studying at a music school in Chengdu city, Chinese Sichuan Province. "Lhalung being a Tibetan singer was not yet involved in any politcal activity," said Phuntsok.

Since her arrest, there is no any official report from the Chinese government. The reason of the young female singer's arrest, news about her current situation and whereabouts are still not known.