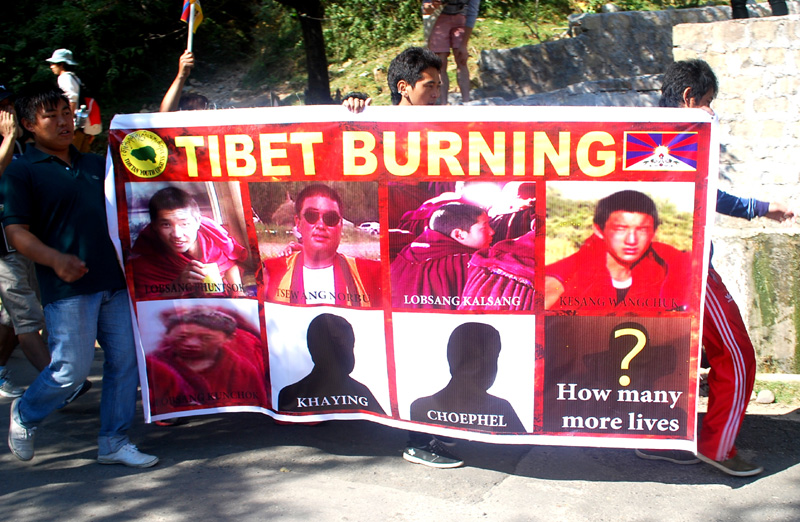 Dharamshala, India: Another young Tibetan has self-immolated in eastern Tibet to protest against Chinese repression, according to exclusive reports received by the Tibet Post.

"At around 11.50 am on October 15th, Norbu Dramdul, age 19, of the Padmatsang house in Soruma, Choeje township, Ngaba county, set fire to himself in the streets of Ngaba county town, shouting “Freedom for Tibet!”, “Return of His Holines the Dalai Lama to Tibet!” and other protest slogans," Kanyak Tsering from India based Kirti monastery told The Tibet Post.

"Police personnel in the county extinguished the flames with water and other dousing materials, beat him and put him into a small police car. Local people have not been able to ascertain where he was taken. Concerned persons reported that although seriously injured, it is evident that he did not die in the course of his protest. Norbu Dramdul had been a monk at Kirti monastery since a young age, but disrobed in June 2010 and has since been living at home with his parents."

This is the seventh self-immolation to occur in Ngaba since March.

Eight people in total have set themselves on fire inside Tibet to protest Chinese occupation and continued repression. The previous incident occurred just last Friday when Khaying, 18, and Choephel, 19, self-immolated. Both lost their lives.

This latest immolation creates increasing urgency to address the situation in Tibet and Ngaba county in particular.

On Wednesday the exiled Tibetan Government called on the international community to urge the Chinese Government "to restore freedom and resolve the issue of Tibet ... for the mutual benefit of the Tibetan and Chinese people."

This latest news brings more grief to the Tibetan community already struggling to come to terms with the death of two young Tibetans that self-immolated last Friday. Last night a candlelight vigil was held in the exiled Tibetan community of Dharamshala to remember them.