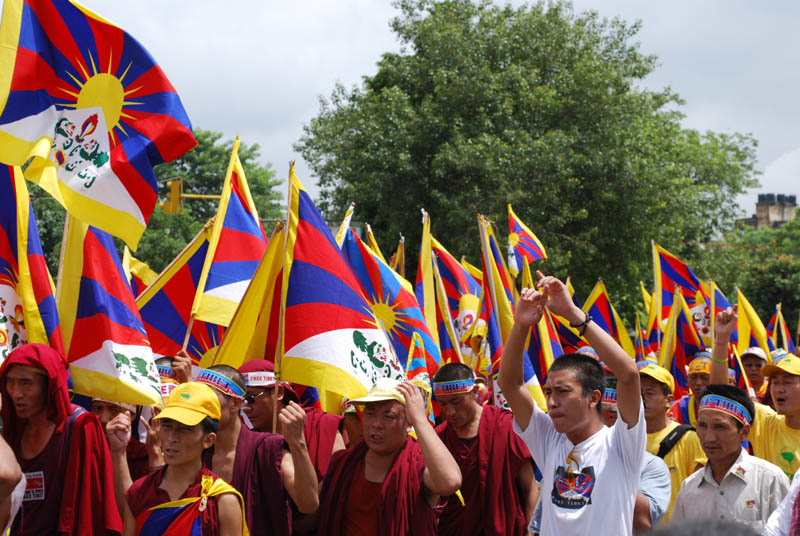 Dharamshala: A Tibetan woman died on Monday after setting herself on fire in Ngaba county of eastern Tibet.

" She shouted ‘Let His Holiness the Dalai Lama return to Tibet!', and ‘We Want Religious freedom in Tibet!,' then set herself on fire and marched for about eight minutes."
Wangmo is the first Tibetan woman from the region to self-immolate in protest against Chinese atrocities against the Tibetan people.

Witnesses say other nuns from Dechen Choekor Ling refused to hand over Wangmo's body to the Chinese authorities.

"Since no armed military forces and police personnel were present at the protest site," said Ven. Tsering, "her body was taken back by nuns."

"Local Chinese authorities demanded that the nun's body either be handed over or buried the same day," he continued, "but we have not been able to learn what happened after that.

" Shortly afterwards, soldiers and police deployed, and sealed off the nunnery and surrounding villages."

Dechen Choekor Ling nunnery, also known as Mama nunnery, is situated around 4km northwest of Ngaba county town. It belongs to the Gelug sect of Tibetan Buddhism and is the largest nunnery in Ngaba, with a community of 350 nuns.

Prior to Wangmo's death, the last self-immolation attempt took place on Saturday when a 19-year-old man set himself alight in the central market in Ngaba town.

According to sources inside Tibet, another Tibetan man who committed a self-immolation protest on October 15 has been removed from Ngaba county, but details of his present whereabouts and state of health are unknown.

Tibetan shops and restaurants in the county remained closed on October 16 in solidarity with the protest.

In a separate incident on Sunday, two Tibetans, Gonga and Druklo, were shot and wounded by security forces during a peaceful protest outside a police station at Tseshul in Serthar, Karze, eastern Tibet.

A total of nine Tibetans have self-immolated within Tibet in protest against Chinese rule and continued repression in the Himalayan region.

Several events, including mass prayers, rallies and candlelight vigils, organised by Tibetans and supporters around the world, have highlighted the situation.