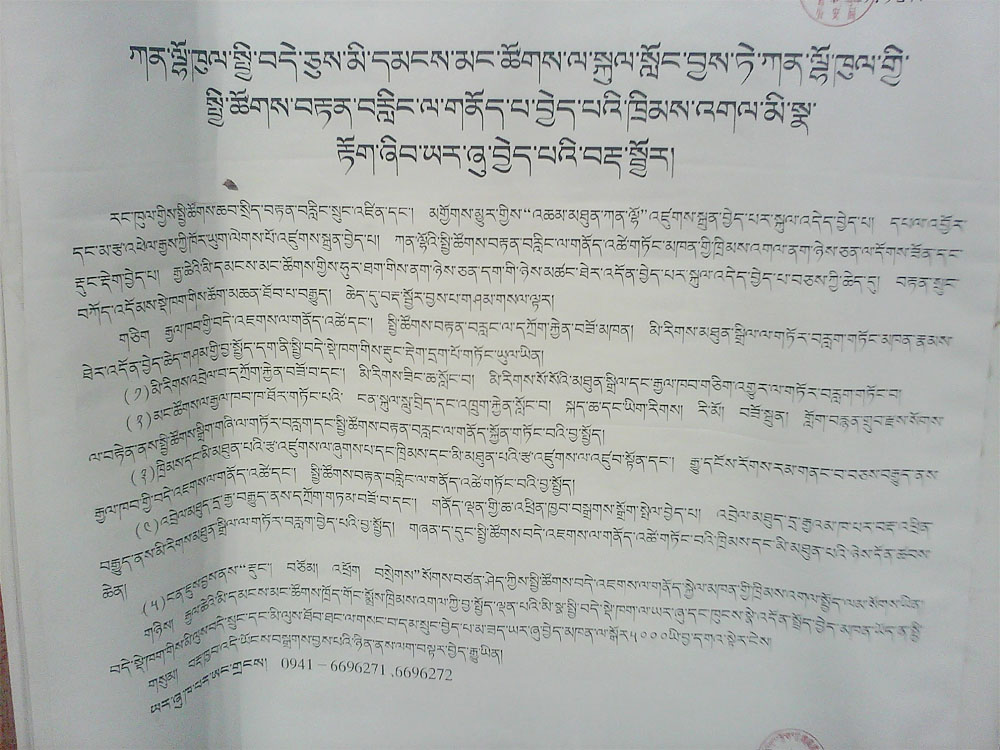 Dharamshala: - The Tibet Post International, via contacts in Belgium and Tibet, has received a copy of a police poster which threatens to punish 'criminals' in Gan Lho Prefecture [Chinese name: Gannan Tibetan Autonomous Prefecture] with beating/torture.

The directive, issued in Chinese and Tibetan language, was stamped with the date 09/03/12 and reportedly posted in the streets, on walls and on trees in Gan Lho's eight counties, where it remains. It requests the public to inform on "criminals" who "threaten the social stability of Gan Lho". Gan Lho Prefecture is in Amdo region, northeastern Tibet.

Listed ‘criminal' activities include: "The corruption of the public with ideas of the splitting of the nation, through speech and the distribution of written information, cartoons, home-made materials and videos", "The incitement of the public to illegal activities through websites, e-mails and audio files," and "all acts destructive to ethnic unity through websites and sms texts."

The poster states that all of these and other activities "will be met with harsh beating/torture by the PSB [Public Security Bureau]."

Following some controversy over the exact wording of the notice, TPI met with Acharya Sangye Tendhar Naga, Head of the Cultural Reasearch Department of the Central Tibetan Administrtation's Library of Tibetan Works and Archives on April 3.

Mr Naga translated the words on the poster - "Rdung Rdeg Drag Po" - as “harsh beating”. He said that the threat of physical violence is unambiguous and explicit and that “Rdung Rdeg” always means a physical act, as in the beating of drum.

Mr Naga confirmed that there is a different Tibetan word for “torture” - "Mnar Chod", but also expressed the opinion that  a person who has been “harshly beaten” would use the word “torture” to describe what had been inflicted on them.

He added that this is actually encoded into Tibetan grammar, which uses different verbs to describe the same action from the point of view of the active and passive parties.

So, to a Tibetan person reading the public notice, implicit in the act of “beating” is the experience of “torture”.

The poster is pictured above, and TPI's translation is presented below:

The following directives have been authorized by the security department:

I) Damage to national security, the destabilization of society, the destruction of ethnic unity.

All the following actions will be met with harsh beating/torture by the PSB:

2) The corruption of the public with ideas of the splitting of the nation, through speech and the distribution of written information, cartoons, home-made materials, videos, etc - all acts destructive to social discipline and stability.

3) The membership, promotion of, or the making of donations to illegal organizations - all of which harm national security and destabilize society.

4) The incitement of the public to illegal activities through websites, e-mails and audio files, all acts destructive to ethnic unity through websites and sms texts, and other major criminal actions against the security of society.

5) The engagement in criminal activities such as grievous bodily harm, destruction of property, arson and looting, etc, and the coercion of others into criminal acts that damage the security of society.

II) Any member of the public who informs the police about the above criminal acts or gives the police information about the perpetrators will be guaranteed personal protection by PSB officers, personal confidentiality, and a reward of 5,000 Chinese Yuan.

Reporters Without Borders (RSF), a press freedom campaigning organisation based in Paris, France, have responded to our report on the public notice by issuing the following response:

"By posting warnings of physical reprisals, the Public Security Bureau is directly violating article 2 of the Convention against Torture and Other Cruel, Inhuman or Degrading Treatment or Punishment, which China has signed. This article says that ‘An order from (...) a public authority may not be invoked as a justification of torture.’

“We call on the UN Special Rapporteur on torture, Juan Mendez, to open an investigation based on this notice published by the Chinese authorities and to condemn their use of such threats. The police must immediately withdraw these posters and stop legitimizing the use of torture and physical mistreatment for criminal actions that are deliberately defined in vague, loose terms open to broad interpretation.”