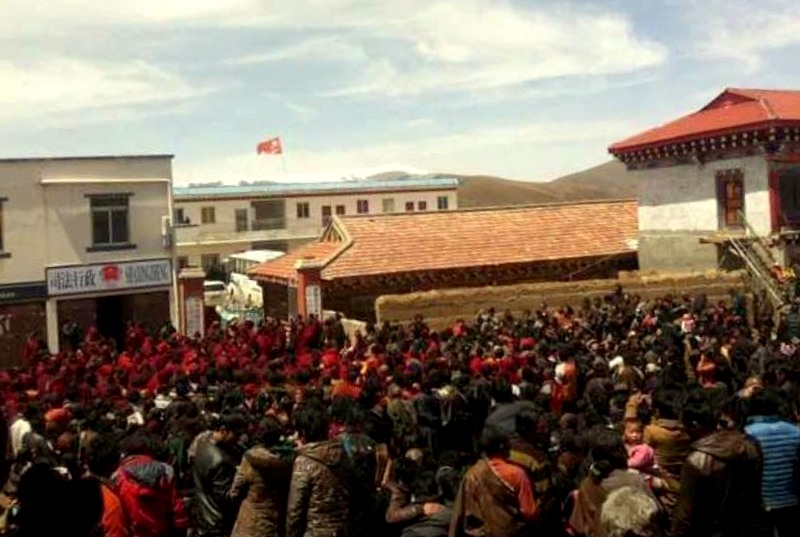 Dharamshala: - Many Tibetans have been arrested, detained and severe beaten by Chinese police in Dzogchen township, Dege county, eastern Tibet during and after a large-scale protest sparked by a latest Chinese crackdown on Tibetans.

On April 24, around 9.30 Am (Tibet Time) over 3,000 monks and laypersons gathered for a sit-in in front of the Chinese authorities' government office and police station in Derge County, Kham region, (Chinese: Sichuan Province), eastern Tibet, in protest against the violent harassment of local monks and laypersons. Later Police beat the protesters, many of whom were admitted to Karze community hospital.

The protests were in response to an unexplained campaign of interrogations, beatings and detentions of local Tibetans in Dzokchen area, and raids on Dzogchen monastery.

The protests were sparked by the Dzokchen monastery being raid by hundreds of Chinese police on April 22, after Buddhist monks publicly enthroning a portrait of His Holiness the 14th Dalai Lama at a religious ceremony that began on March 19, said sources. Thousands of local Tibetans paid their respects to His Holiness the Dalai Lama by offering traditional scarves (Khata) to His Holiness's portrait.

Local sources reported that several monks were beaten, interrogated and arrested, one of whom, Gyatso, is said to be in a critical condition.

A monk from Dzogchen monastery, now living in exile, reported that, "Gyatso was beaten by the Chinese for simply staring at the face of the Chinese policemen." A 13-year-old monk is also reported to have been assaulted, according to sources.

The situation remains tense in areas of Dzokchen, amid a tight security lockdown and foreign journalists were denied access to the area.