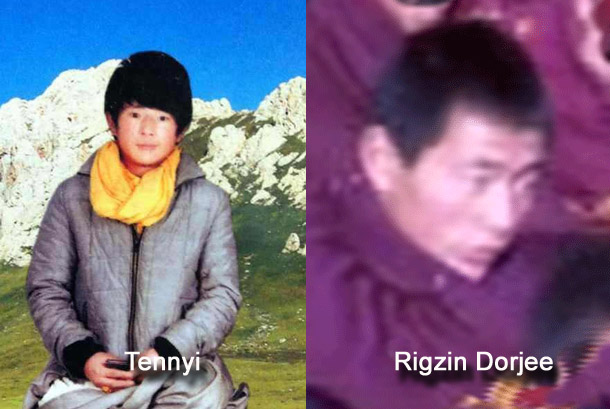 Dharamshala: At the beginning of this year, on the 6th of January, 20 years old Tibetans, Lobsang Tsultrim and Tennyi, have self-sacrificed in Ngaba County City, north-eastern Tibet.

The photo of Lobsang Tsultrim was sent to the news channels while the photo of Tennyi was never received.

However yesterday, 15th of August, one of the unconfirmed sources has sent the photo and additional information about the latter self-immolator to the coordinator of the Kirti Monastery in Dharamshala.

Tennyi was bought up in Upper Tawar village in Ngaba County by father Yarphel. During his childhood years, Tennyi had joined Kirti Monastery in Tibet where he served as monk.  Just a few years ago, he decided to give up monk's life and became a lay person.

Another photo of self-immolator Rigzin Dorjee, who was also known as Rigbey, was sent by the same unidentified source which later was forwarded to the Tibet Post International by the Kirti Monastery's media coordinator.

Rigzin Dorjee set himself on fire on the 8th of February 2012 and, almost two weeks later, passed away in Barkham City, the center of Ngaba Region.  Rigzin Dorjee was a son of Tsnnkho and Dhungkar.

The communist authorities of the Chinese government have introduced strict control on the news media and other forms of communication throughout the Tibet, when dealing with situation in the region. It does make it hard, and sometimes even impossible, to retrieve latest information about self-immolations and other important incidents in the country.

China also banned foreign media journalists from reporting from the Himalayan region. The authoritarian government banned reporters whose reports this government finds objectionable and sees as besmirching to its so called global image.

There is no freedom of press in Tibet for the past six decades. Lately, Hu's regime has imposed even more restrictions on the use of internet, text messaging, telephone calls, music publishing, and photocopying. This year China once again has been coloured black in the Freedom of the Press Worldwide map, which indicates ‘very serious situation’.