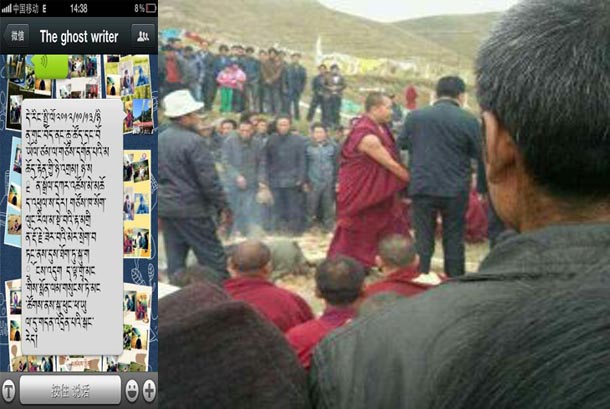 Dharamshala: - A Tibetan man set himself alight and died today, Saturday afternoon in Tsoe city, Malho county of Amdho region, north-eastern Tibet to protests against China's repressive policies targeting Tibetans in their homeland, according to a latest information received by The Tibet Post International, a news agency based in Dharamshala, India.

"The local Tibetans refused to hand over his body to Chinese authorities and they took his body back to his home. As a mark of respect, they then gathered to pay their last respects to Tamdrin Dorjee and offered traditional scarves to his body," he further added.

Gedhun stated that "Tamdrin was grandfather of 7th Gungthang Rinpoche, a highly respected Tibetan master, also the second most senior religious leader at Labrang monastery in Amdho region. The Buddhist monks in the area offering prayers for Dorjee who sacrificed his life for Tibetans and Tibet."

The situation there remained tense, as large number of police and paramilitary forces are reportedly deployed to the area where the incident occurred.

In recent months, Tibetans have become more forceful in their protests against China's repressive policies targeting Tibetans in their homeland, with a tragedy series of at least 55 Tibetans setting themselves alight since 2009, 45 of which already have resulted in death.

The Tsoe area has witnessed many protests against Chinese rule in the past, with mass demonstrations in 2008 and 2010.