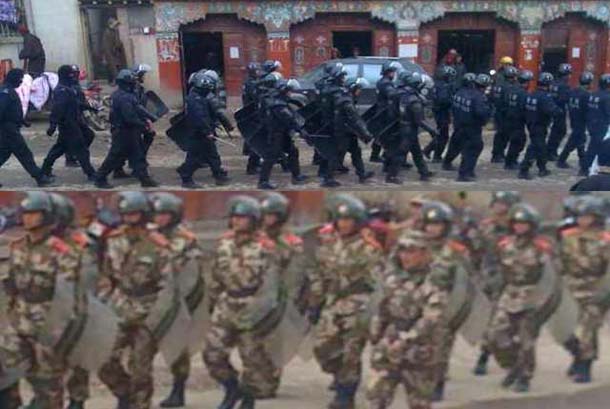 Dharamshala: - The situation became very tense in the Sershul Dzachukha county of eastern Tibet in this week after making several arrests, deploying armed police and paramilitary forces, according to reports from inside Tibet.

"The heads of each families were ordered by the Chinese authorities to hold a meeting on Tuesday, October 16, 2012, but they did not mentioned what was the meeting of the local Tibetans about," said Ven Jampa Yonten from Sera Monastery in South India, citing sources from inside Tibet.

"The situation became very tense, as several Tibetans arrested and all means of communication were blocked in Sershul Dzachukha of Kham, the eastern region of Tibet," according to sources inside Tibet.

The Serschul Dzachukha area has witnessed many protests against Chinese rule in the past, with mass demonstrations in 2008.

"Seven Buddhist monks from Wonpo Monastery have been sentenced to a 2-7 year prison term for involving with 2008 protest. They were convicted over 2008 peaceful protest marched by 14 monks from Sera Monastery in Lhasa, the capital of Tibet."

"Adhe Lama, a respected monk arrested in 2008, known as the spiritual head of Wonpo Monastery is still being held in Chushul detention center in Lhasa," the sources continued.

According to sources from inside Tibet, "the Chinese authorities had imposed heavy restrictions on Tibetans in the county, after pulling down a Chinese flag at a school in the area, raising the Tibetan national flag and distributing Leaflets calling for Tibet's freedom."

In recent months, Tibetans have become more forceful in their protests against China's repressive policies targeting Tibetans in their homeland, with a tragedy series of at least 55 Tibetans setting themselves alight since 2009, 45 of which already have resulted in death.