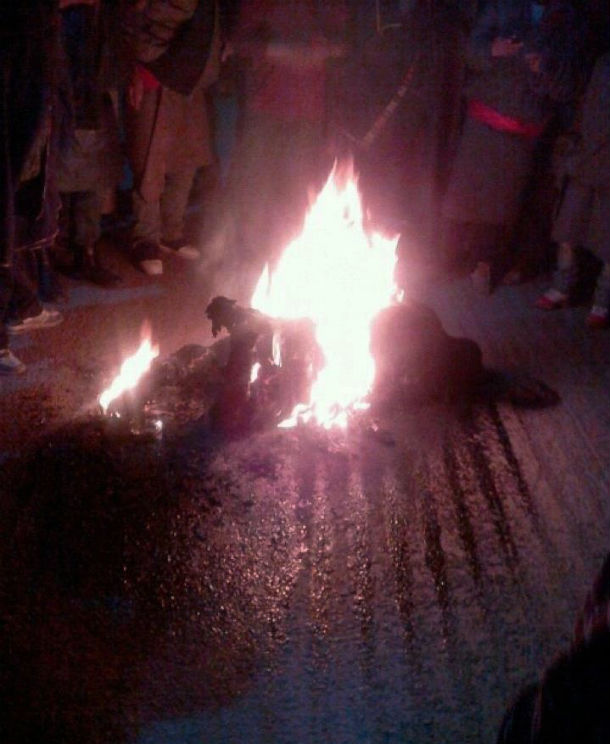 Dharamshala: - Two young Tibetan men died in two separate self-immolation incidents in Tibet today. Another Tibetan man died on Friday evening after setting himself on fire in north-eastern region of Tibet, an information received by The Tibet Post International Friday evening said, in the fifth self-immolation protest in the region in less than a week.

"The local Tibetans protected him from Chinese authorities during his protest and later they took him back to his home town. Traditional prayer services are also reportedly being held for Thupwang," he added.

He also said that "the local Tibetans paid their last respects to Tsephak and offered traditional white scarfs to his body."

"Thupwang shouted slogans calling for "return of His Holiness the Dalai Lama to Tibet, freedom in Tibet, and release of the Panchen Lama, including all the Tibetan political prisoners," Ajam further said.

A photo shows that local Tibetans were surrounding him paying their respects, while his body still burning and smoking from the ground.

The incident follows that of another Tibetan man today, Lhamo Tseten, a father of two years old daughter who set fire to himself near a hospital in the region today at around 2.30pm. Three other Tibetan men have self-immolated in the same county since Saturday, October 20.

The tragic wave of protesting against Beijing's heavy-handed rule in Tibet have been taking place since 2009, demanding freedom for Tibetans and the return of His Holiness the Dalai Lama to Tibet. Over 60 Tibetans - including monks, nuns, students and lay people - have set themselves on fire and that 50 of them already passed-away.