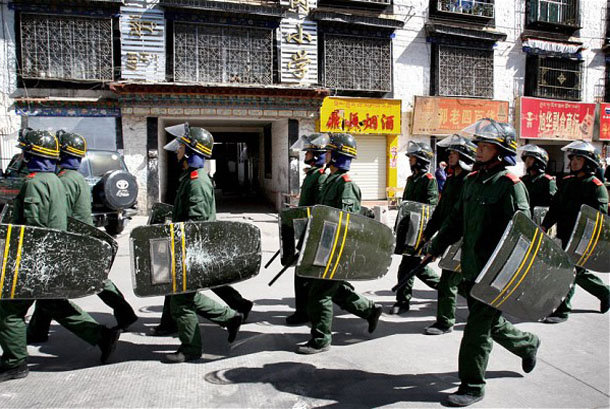 Dharamshala: Reports have emerged from Tibet that a 30 year old male named Jigme Tseten wrote 'Independent Tibet' in his own blood before apparently taking his life, according to sources in Amdo (Eastern Tibet).

The incident occurred as long ago as November 8th 2012; coinciding with the controversial power shift among the Chinese Government in Beijing, amid a wave of self-immolation protests in the area. However it remains unclear as to the exact date of the protest, due to mass communication blackouts imposed by Chinese authorities in Eastern Tibet during early November.

30 year old Jigme Tseten, from Tsoe City in Amdo; Eastern Tibet, is reported to have used a knife to cut and draw blood from his chest, in order to write the message 'Independent Tibet' on the wall of Kagya (Upper) School, Tsoe City.

Following this, the young Tibetan is reported to have used the knife to take his own life. It remains unclear as to whether the 30 year old Tibetan died at the scene; however it appears he succumbed to his injuries and passed away.

Highlighting the lengths Tibetans are taking to protest against Chinese rule, and the heightened sacrifices young men and women are making, it appears that Jigme was married, with two young children. He was originally from Chunnag Township, of Kagya, Tsoe City (Amdo).

During this time of the protest, Tsoe city witnessed mass communication blackouts. The timing of the incident, along with a steep rise in the number of self-immolation protests, occurred during the 18th Chinese Congress Party meeting in Beijing.

Commenting on the incident, an anonymous source from Tibet stated:

'During this time all the communications were cut down. This information has only arrived today [December 5th 2012]. Many police came to the city and looked at Tibetan social media; phones, and information on how protest news is being sent'.

The report also stated that many Tibetans have since been arrested by Chinese police in the city, adding that tensions remain high.

The unusual step for a Tibetan to take this form of protest highlights the growing unrest in the region, particularly in Eastern states Amdo and Kham. Since 2009, roughly 92 Tibetans have taken to self-immolation as a form of protest without harming others, a staggering toll. The method by Jigme Tseten underscores the manner and lengths Tibetans; even those with families, will persevere to amplify their message of freedom.