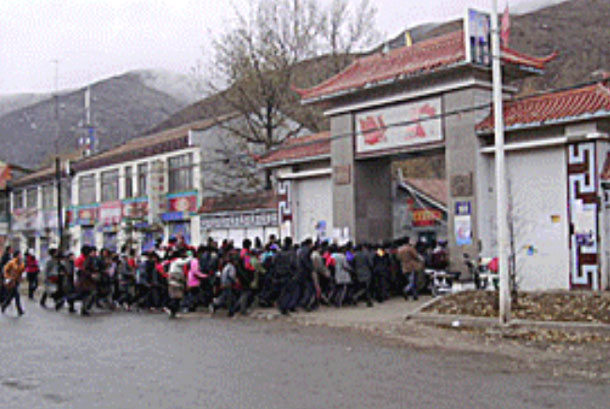 The final messagesand actions of the young monk have finally surfaced, amid crackdowns, arrestsand communication blackouts across the region by Chinese authorities in response to the sharp rise in protests by Tibetans.

News from Amdo in Eastern Tibet has reached exile communities in India, stating that before the young monk fromPengak Monastery in Amdo self-immolated,an anonymous phone call was made to a resident monk of the same monastery, informing him of his imminent plans.It is believed Gendun stated:

It is also reputed that the young Tibetan added: ‘I will drink acid and burn myself’.

Explaining why he had phoned rather than writing a final letter, Gendun is believed to have said his literary skills were not good enough to write a final note, which is why he called the monk, also of Pengak.

‘My only hope is for Tibet to be united across all regions [Amdo, Kham, U-Tsang] and for the Tibetan people not to fight each other’.

‘If we can unite and not fight each other, our hopes will be successful’ he added finally.

It is reported that after the phone call, as Lobsang Gendunburned himself, he sat in penance and shouted:

‘Tibetan people should be united’

The young Tibetan subsequently succumbed to his injuries and died. Regarding the incident, on the evening of December 3rd, Chinese police arrested a local Tibetan man named Dordhar in Pema County, due to his close friendship with Lobsang Gendun.

Gendunis known locally as a respected member of the community, renowned for counselling local and domestic disputes before they reached court among the Tibetan community. It appears that in 2008 he was also arrested by Chinese police for leading a protest march during the Tibetan uprising. His current whereabouts remain unclear.

After the death of Gendun, resident monks and laypeople covered his body in prayer scarves (Khata)consolidated his family.The message of unity left by the 29 year old was promised to be upheld by the community; reportedly word has spread to over 1000 Tibetans in the region to adhere to his final message.

Three days later, December 5th witnessed the funeral of the young monk, who was roughly the 92nd Tibetan to burn himself in protest since 2009.Many, including Lobsang’s family members, were concerned tensions would be too high between Chinese police and villagers, and instead refrained from attending the funeral service.

Tensions are currently running high in Pema County, with a surge in Chinese armed Police and soldiers from Chedhu county and from Tsongon [Qinghai Province: Chinese] in the region. A social media blackout remains in force, as well as blackouts on phones and internet access.

Lobsang Gendun was monk of Pengak Monastery; one of 23 monasteries in Pema county, Amdo: Eastern Tibet.