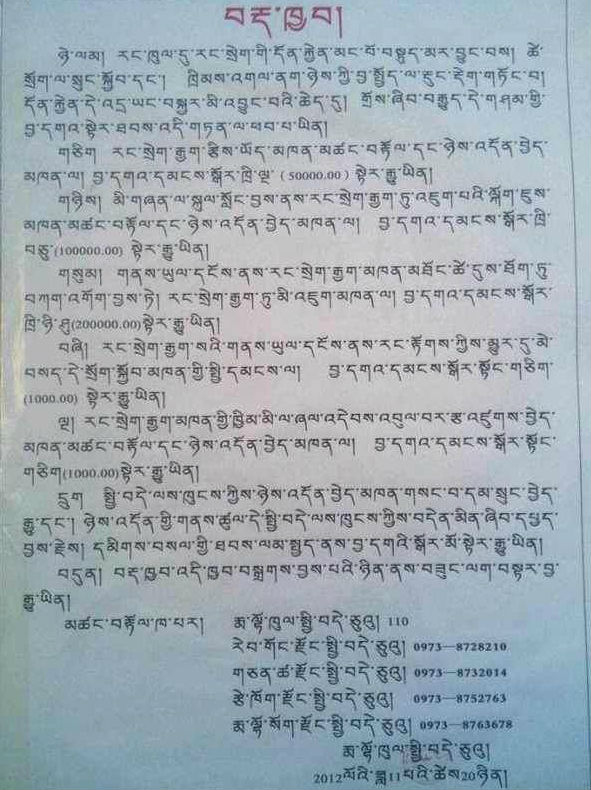 Dharamshala: - On November 2 Chinese authorities announced a new policy that rewards anyone who discloses information about self-immolations. The document was issued by the Malho People’s Intermediate Court and the Public Security Bureau and applies to the Malho region areas of Rebkong, Tsekhog, and Chentsa.

The document was issued in response to the recent spree of immolations occurring throughout Tibet, which, since March, have been increasing in frequency in the Malho region. The most recent self-immolator, schoolgirl Bhenchen Kyi, was from Tsekhog area of this region.

The seven point policy details the authorities plan to reward anyone who divulges information regarding past or future self-immolations. Rewards ranging from 1,000 Chinese Yaun (US $ 160) to 200,000 Yuan (US $ 32,000) have been promised to deter Tibetans from participating in this form of protest, and to encourage friends and family members to denounce acquaintances involved in such action, as well as those who have offered condolences to families of self-immolators.

Further, authorities have issued an ultimatum warning those involved in self immolations to turn themselves in immediately so that they may face ‘lesser’ punishment.

The notice, issued in Tibetan and Chinese, tells Tibetans to “accept their crimes” of inciting and participating in self-immolations, displaying images of the Dalai Lama, condoling families of self-immolators, and “unlawfully” spreading news, photos, and videos of the immolations to the outside world.

According to sources on the news blog Phayul, similar cash rewards and bribes have been offered to families of self-immolators if they state that the protests were not against the Chinese government.

In the weeks since the policy was issued harsh security crackdowns have occurred throughout the region and several arrests have been made.