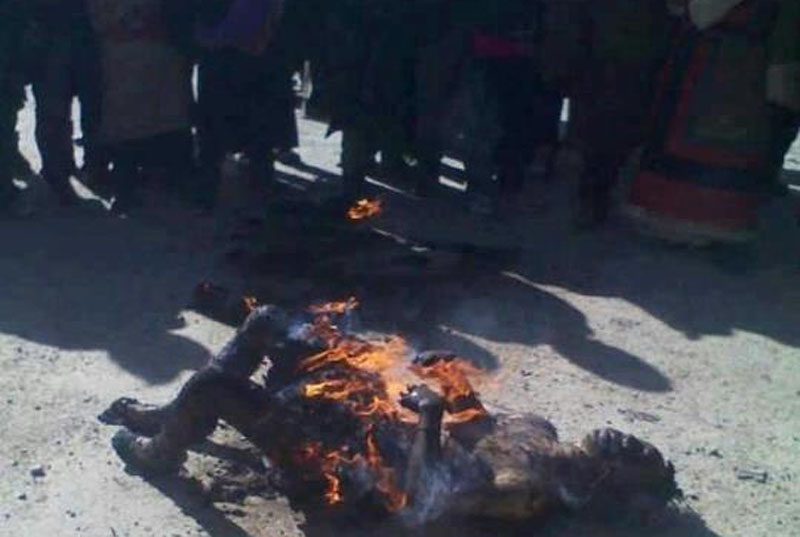 Dharamshala: A Tibetan man has reportedly died after setting himself on fire in Amchok region of Labrang, Sangchu County, Amdho Province, North-eastern Tibet (China's Qinghai province), according to sources from inside the region on Saturday, in the latest in a series of protests against Chinese rule.

The latest sources coming out of Tibet said that a 22-year old young Tibetan man, Tsering Dhondup (Tsebhe) self-immolated on Saturday (Around at 12am Tibetan local time) in front of the main gate of Amchok township in Sangchu county.

"His real name is Tsering Tashi, but locals call him Tsebhe. Local Tibetans carried his body to his home before Chinese security authorities arrived, where many more locals and Buddhist monks gathered to say prayers and pay respects for Tsering Dhondup," sources told The Tibet Post International.

The latest death brings to at least 96 the number of Tibetans who have self-immolated since 2009, including 81 last year in protest against China's strict control over Tibet's Buddhist culture and a suffocating security presence in Tibetan regions.

All of the Tibetan self-immolaters have doused themselves with petrol and set themselves alight after shouting slogans calling for freedom in Tibet and the return of His Holiness the Dalai Lama to Tibet.

The last incident in 2012 was reported about the self-immolation of a teen-aged Tibetan girl, Bhenchen Kyi, aged 17, who self-immolated on December 9th in protest against Chinese rule in Tibet. Her death came the day before International Human Rights Day.

The communist regime, China has always accused exile Tibetans of self-immolating as part of a separatist struggle for independence for Tibet, denouncing them as terrorists. However, Central Tibetan Administration based in India says protesters are driven to self-immolate largely because they cannot tolerate China's policies in Tibet.