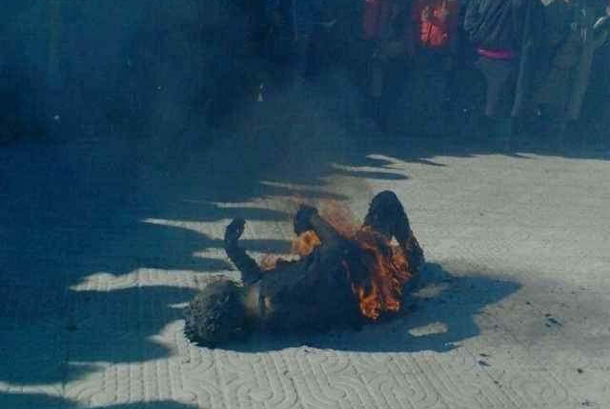 Dharamshala: - A Tibetan man has died after setting himself on fire to protest Chinese repressive rule over Tibet, source from inside the region said the latest in a series of protests against China's hardline and repressive policies on Tibet.

The latest sources coming out of Tibet said that a 28-year old Tibetan man called Dupchok self-immolated on Friday (Around at 3.15pm Tibetan local time), January 18, in Drachen village, Kyungchu county,(Chinese: Hong yuan)north-eastern Tibet. Dupchok is survived by his wife and two daughters, aged 5 and 3.

A Tibetan living in exile originally came from the region also clarified that his name is not Tsering Phuntsok, but Dupchok.

Most of the Tibetan self-immolaters have doused themselves with petrol and set themselves alight after shouting slogans calling for freedom in Tibet and the return of His Holiness the Dalai Lama to Tibet.

The latest incident brings to at least 97 the number of Tibetans who have self-immolated since 2009, including 81 last year in protest against China's strict control over Tibet's Buddhist culture and a suffocating security presence in Tibetan regions.

Tsering Phuntsok is survived by his wife and two children.